Koffee With Karan 5: Zoya Akhtar, Imtiaz Ali And Kabir Khan Were Outstanding In Front Of Camera 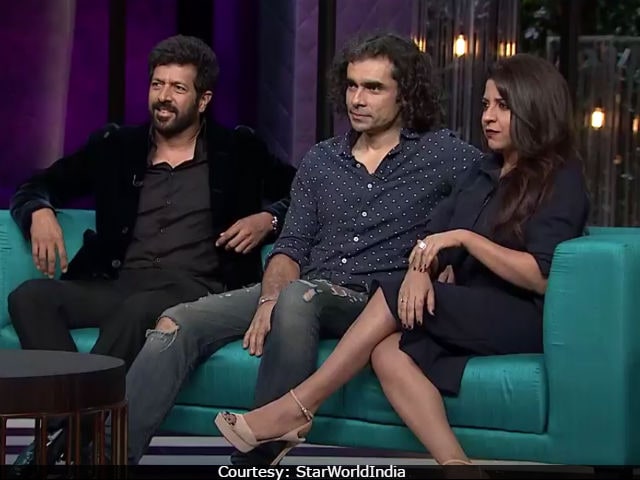 Zoya Akhtar, Kabir Khan and Imtiaz Ali in a still from Koffee With Karan 5 (Courtesy: StarWorldIndia)

New Delhi: Karan Johar opened his chat show Koffee With Karan 5 on an exciting note. He called tonight's episode as 'Directors Special' and termed his guests to be daring, prolific and successful. As he welcomed Zoya Akhtar, Kabir Khan and Imtiaz Ali, Karan said that he would behave more like a director, a filmmaker and not the typical host he is. This was Kabir's Koffee debut while Zoya and Imitiaz had appeared on the show before. In fact, Karan termed Zoya to be the 'Seductress of Koffee With Karan. The trio and Karan talked about cinema, actors, directors and the art of filmmaking.

The Luck By Chance director had all praises for Aamir Khan's Dangaland said that the wrestling drama was 'outstanding.' She even spoke about how much she liked Neerja and the Marathi film Sairat.

Zoya added that 2016 was good in terms of films releases and their box office success and the audiences witnessed some very beautiful films.

Imtiaz Ali Just Cannot Do Away With Songs

Imtiaz Ali, who had directed films like Jab We Met and Tamaasha, said that he cannot get rid away from songs in his films. Imtiaz said, "I love songs, I can't do away with them in the films." He added that through songs you can connect to the audiences much better that stories.

Making Dil Dhadakne Do Was Easy For Zoya Akhtar

The Feeling Of Rejection

When Karan asked how does it feel when actors reject the films? Zoya instantly replied. She said, "In the beginning, I used to feel bad, but now I, I'm used to it and think It's Ok, work if you want to."

Meanwhile, Kabir Khan, who has given successful films like Bajrangi Bhaijaan and Sultan said that as a documentary filmmaker, his struggle was to get to the producer level. He said, "It took me a year to meet Aditya Chopra for Kabul Express. Nobody helped me though they said the script is nice." He shared an anecdote, where his friend told him, "Batana nahi ki documentary filmmaker ho."

Imitiaz Ali said revealed that his 2008 blockbuster Jab We Met was rejected by many people. He said that for once I gave a second thought on the script.

Karan Johar said that he reads all reviews that are published about each and every film and asked that whether the others are also the same. Zoya said that she does it for only her films, but, she finds them to be irrelevant.

Kabir is of the belief that there should be a holistic approach to the reviews that are written while Imtiaz said that he doesn't read them.

When Karan asked the director trio which actor is always on time and late on the sets? The director trio revealed that Shah Rukh Khan and Salman Khan are always late while Amitabh Bachchan is punctual.

One Advice For Censor Board

Zoya Akhtar's answer was, "Censor board needs to find their identity."

The Best Actor And Actress Of 2016

Ranbir Kapoor received maximum votes for Ae Dil Hai Mushkil while Alia Bhatt in Udta Punjab according to them was the best.

Promoted
Listen to the latest songs, only on JioSaavn.com
Imitiaz Ali and Kabir Khan won the Koffeeor the Cross-Fire Round while Zoya Akhtar won the Rapid Fire segment.

Next, we will see stand-up comedian Kapil Sharma on Karan Johar's couch and going by the teaser, the episode promises to be a laughter-riot.