Kirti Kulhari Is Missing The Pool. We Can Relate

"Seems like it's going to be a while before I can do this again," wrote Kirti 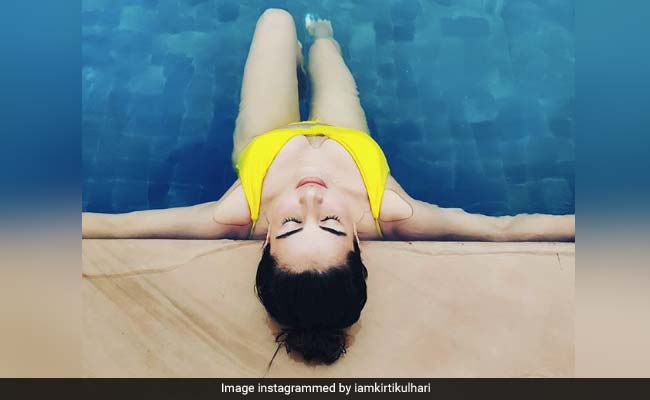 Kirti Kulhari is remembering her pool and bikini days. The 35-year-old actress, on Tuesday, spread major summer vibes on her Instagram profile with a picture of herself in the pool. In the picture, which seems to be a throwback, Kirti Kulhari can be seen enjoying her time in the pool. Sharing the picture, Kirti captioned it, "Seems like it's going to be a while before I can do this again." Seems like, Kirti is missing the pool, just like us. She also added the sad and crying emoticons to her post. Take a look:

Kirti's post flooded with comments from her fans in no time. A user wrote, "slay," while multiple users dropped love emoticons on her picture.

Earlier, Kirti shared a message about "bikini body" on her Instagram profile. The Pink actress shared a picture of herself from her vacation in Turkey and wrote, "All those who choose to wear a bikini already have the body for it" and added the hashtag "every body is a bikini body."

All those who choose to wear a bikini already have the body for it... #everybodyisabikinibody #throwbacktuesday #Bodrum #Turkey

Kirti Kulhari is best known for her roles in films such as Pink, Shaitaan, Uri: The Surgical Strike, Mission Mangal and Indu Sarkar. Kirti was last seen in the Amazon Prime web-series Four More Shots Please where she portrayed the role of a divorced lawyer.

Earlier, in a Humans Of Bombay post, Kirti wrote about her journey from a strict household to Bollywood. She wrote, "Not being from anywhere close to the film industry, I knew it would be difficult for them to wrap their head around it. So I sat them down and asked them to give me two years. I would give it my all and if I discovered myself, I'd stick with it. To my surprise, dad became my advocate while everyone else had their doubts. My siblings thought he was just giving in to my 'whim', but he asked me to give it a try with all I had." Kirti made her Bollywood debut with Atish Kapadia's comedy film Khichdi: The Movie in 2010.

Kirti Kulhari will next be seen in Ribhu Dasgupta's thriller The Girl On The Train, starring Parineeti Chopra. The film is based on Paula Hawkins' book of the same name.