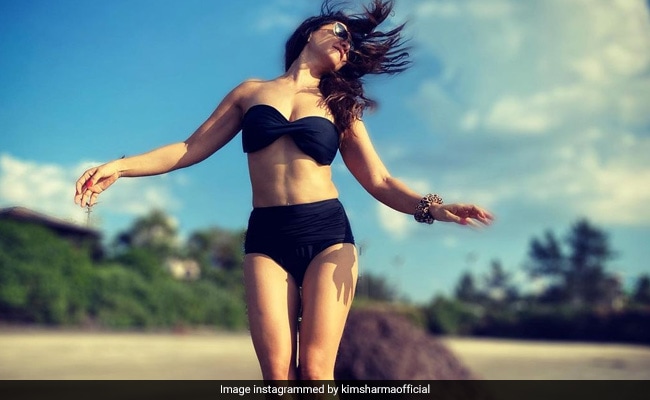 It's not Friday for Kim Sharma, it's "fly day" for her. We aren't saying this, Kim's latest Instagram post is proof of it. The Mohabbatein actress posted a picture on Instagram in which she can be seen enjoying her day on the beach. Kim looks stunning in a strapless black bikini, as she posed for the photo while standing on a big rock. She has left her hair open and is sporting sunglasses. Going by the picture, Kim is enjoying the beach vibes. The actress wrote a caption along with the photo, "Fly Day."

Kim keeps sharing pictures of her vacations on Instagram. See some of her posts here:

Kim Sharma made her acting debut in the Aditya Chopra's 2000 film Mohabbatein. She played one of the leads in the movie and was paired opposite Jugal Hansraj. The film featured Shah Rukh Khan and Amitabh Bachchan as main leads. Aishwarya Rai made a cameo in the 2000 film. Apart from them, Uday Chopra, Shamita Shetty, Jimmy Shergill and Preeti Jhangiani were also cast as leads. Mohabbatein was a breakout film of Kim's career in Bollywood.

Coming back to Kim's latest post, we can surely say that she is a beach baby.