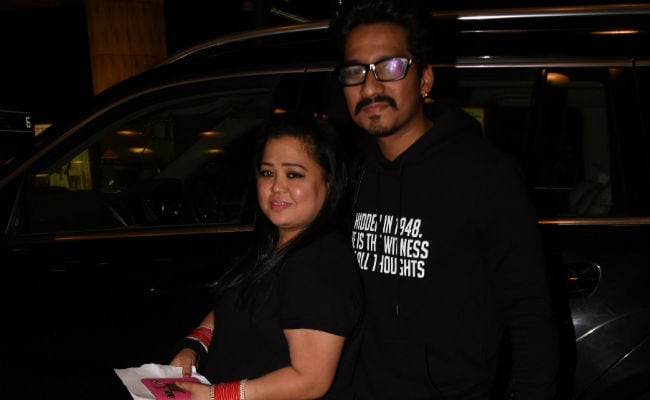 Bharti Singh and Haarsh Limbachiyaa at the Mumbai airport

One of television's popular reality shows Khatron Ke Khiladi is back with its ninth season. Filmmaker Rohit Shetty, who is currently busy with his film Simmba, will host this season too. Indian Express reports that famous TV personalities like comedian Bharti Singh, Bigg Boss 11 finalist Vikas Gupta, Balika Vadhu actress Avika Gor will be a part of Khatron Ke Khiladi 9. Interestingly, Bharti Singh will compete against her husband Haarsh Limbachiyaa. Actress Shamita Shetty, who is alumnus of Bigg Boss, is also participating in Khatron Ke Khiladi 9. This season will be shot in Argentina. Vikas, Bharti, Haarsh and Shamita were photographed at the Mumbai airport last night on their way to Argentina.

"This time the makers are leaving no stone unturned to produce one of the most exciting seasons of the show. The contestants will start flying to Argentina from July 11 and the shoot will begin from July 15," a source told Indian Express.

Vikas Gupta was accompanied by Priyank Sharma and others at the airport.

Avika posted this for the show.

Khatron Ke Khiladi is an adaptation of the American television show Fear Factor, where participants are made to face their fears through several stunts. Besides, Rohit Shetty, celebs like Akshay Kumar, Priyanka Chopra and Arjun Kapoor have also hosted the previous seasons of the show.