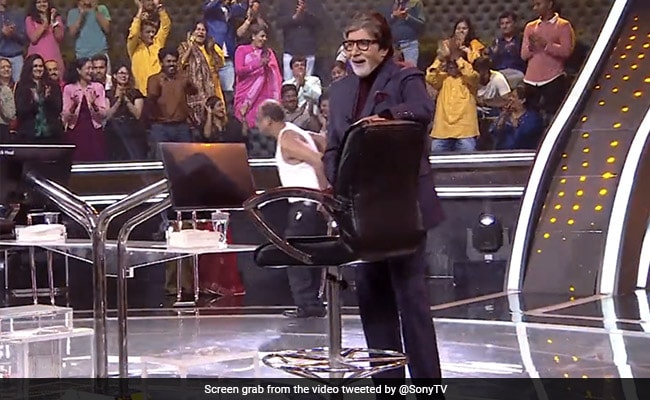 Kaun Banega Crorepati (KBC) has its own fan following. There are many people who are waiting to get a chance to be on the "hot seat" in front of the host Amitabh Bachchan. So, when Mr Bachchan announced the name of a contestant who won the 'Fastest Finger First' qualifying round in the 14th season of the show, he got excited, removed his shirt and started waving it. The gesture is seen in the clip posted on Twitter by the makers of the show. The man's act left Mr Bachchan surprised.

The clip starts with Mr Bachchan announcing the name of Vijay Gupta, who won the 'Fastest Finger First' round and was set to sit in front of the superstar on the quiz show. An excited Mr Gupta removed his shirt, hoisted it in the air and then threw it at the audience before going to his wife to give her a hug on making it to the hot seat.

Mr Gupta then leaves the stage and Mr Bachchan also follow him backstage to bring him back.

The gesture reminded some social media users of former Indian skipper Sourav Ganguly waving his jersey at Lord's in 2002.

The first season of Kaun Banega Crorepati premiered way back in July, 2000 and saw Big B as the host. The actor has, since then, served as the host of the show in almost all of the seasons, except season 3, which was hosted by Shah Rukh Khan.

This season, the makers of the show have raised the upper cap of prize money from Rs 7 crore to Rs 7.5 crore and made an addition of Rs 75 lakh prize money between the Rs 50 and Rs 1 crore levels.