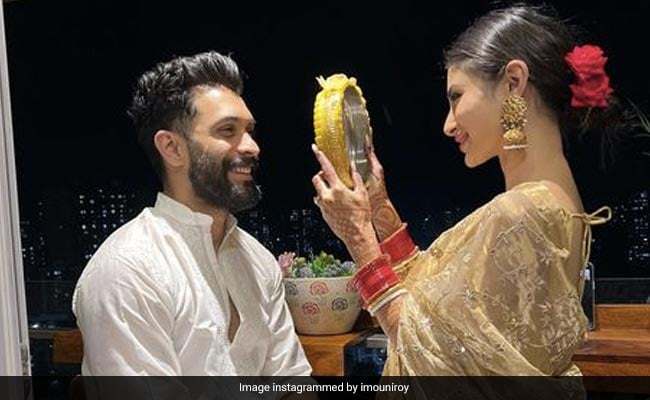 Mouni Roy, who is celebrating her first Karwa Chauth with her husband, Suraj Nambiar, has shared pictures from the festivities, and we can't take our eyes off the couple.  In the images, Mouni looks beautiful in a golden saree with red bangles and statement earrings. Suraj, on the other hand, looks handsome in a white kurta pyjama set. In the first image, Suraj gives a peck on Mouni's cheek, and in the next, Mouni looks at Suraj's face through a sieve. The third is a solo image of Mouni in which she is posing for the camera. In the caption, she wrote, "My happy place."

Earlier, Mouni Roy shared the pictures of her mehendi and captioned it as "Firsts are always special...Happy Karwa Chauth beauties".

Mouni Roy and Suraj Nambiar, an entrepreneur, got married this year on January 27 in Goa. The couple had two ceremonies - per Bengali and South Indian rituals.

Meanwhile, on the work front, Mouni Roy was recently seen in Ayan Mukerji's Brahmastra, co-starring Ranbir Kapoor, Alia Bhatt, Amitabh Bachchan, Nagarjuna and Shah Rukh Khan. In the movie, she played the role of Junoon, the queen of darkness. The actress received immense praise for her performance in the movie.

Mouni Roy made her acting debut in Bollywood with the 2018 film Gold alongside Akshay Kumar.