Kareena Kapoor's Birthday Promise To Self: Keep The Fire Burning 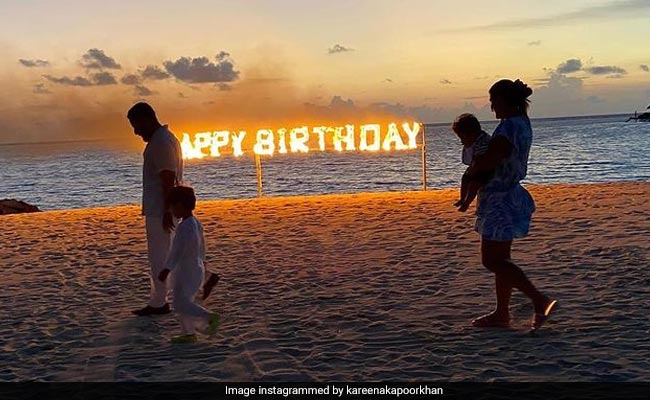 Kareena Kapoor, who turned 41 on Tuesday, celebrated her special day with her family in Maldives. She posted a picture from the island nation on Wednesday afternoon. The picture features Kareena Kapoor with husband Saif Ali Khan and sons Taimur and Jeh  strolling on the beach. Kareena Kapoor, in her caption, revealed that she made a promise to herself on turning 41. "Keep the fire burning... Birthday promise to myself,' she wrote. Her post was filled up with birthday greetings and heart emojis from fans.

Kareena Kapoor  checked into the Maldives a few weeks ago and has actively been sharing pictures on social media. Several fan pages dedicated to Kareena Kapoor, shared the pictures on Instagram.

On the work front, Kareena Kapoor was last seen in the 2020 film Angrezi Medium, co-starring late actor Irrfan Khan, and actress Radhika Madan. Kareena will next be seen in Aamir Khan's Laal Singh Chaddha, which is a remake of the 1994 film Forrest Gump. Kareena shot for parts of the film during her pregnancy last year. She recently turned author with her pregnancy memoir The Kapoor Kapoor Khan Pregnancy Bible. The actress will soon make her debut as a film producer.