Kapil Sharma: I'm Not Done Yet - Netflix Special Is Funny In Parts But Never Piercing Enough

Kapil Sharma: I'm Not Done Yet - His offhand style of delivery and warm amiability are a perfect fit for a packaged performance that lasts 50-odd minutes, just long enough not to let you wander off and wonder what it is all about. 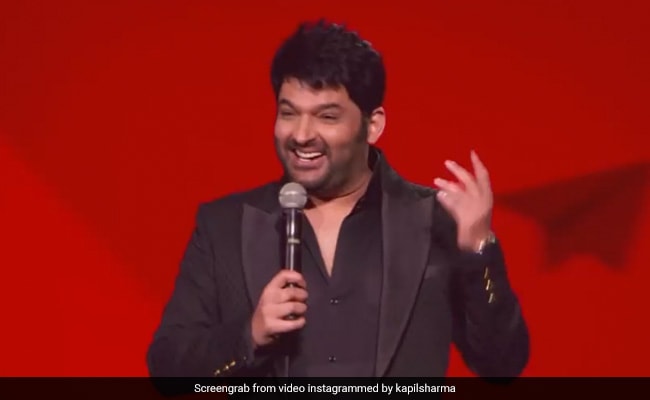 A still from Kapil Sharma: I'm Not Done Yet. (courtesy kapilsharma)

A comedy routine that attempts a blurring of the line between friendly broadsides and personal confessions, Kapil Sharma: I'm Not Done Yet, is a largely pallid, hit-and-miss act that would have amounted to zilch had the popular television personality not held forth on his brushes with alcoholism, depression and troll armies (not in order of severity).

The Netflix Stand-up Special scripted by the performer himself with Anukalp Goswami marks Sharma's web debut after 15-plus unbroken years of success on television as an entertainer with his own comedy show and fan following. His offhand style of delivery and warm amiability are a perfect fit for the compact format of a packaged performance that lasts just 50-odd minutes, just long enough not to let you wander off and wonder what it is all about. Sharma brings all of his good-natured country cousin vibes to bear upon the set and makes I'm Not Done Yet easy to consume. It is, however, hugely disappointing that the routine, barring a few jabs that he throws at the rich and the powerful, is an affair that lacks bite. If not entirely fluffy, it isn't the kind of sharp-edged, scorching stand-up act that simmers and crackles and leaves behind a trail of bruises.

Even as he occasionally punches up at the high and mighty - politicians, star cricketers, powerful industrialists and movie stars are all fair game - Sharma shies away from adopting a take-no-prisoners approach. He tiptoes cautiously around hot-button topics and favours a combination of feeble sparring motions over stun-gun shots.

The performance definitely has its moments, but it isn't electrifying or explosive in terms of impact even when Sharma opens up about his career-threatening indiscretions. The personality behind the funny man peeps out of the haze once in a while and gives the audience something to mull over.

Yes, Kapil Sharma fans will have a great deal to take away from this soul-baring performance. He talks about many a personal issue with commendable candour, including his relationship with his policeman-dad who succumbed to cancer when Sharma was in his early 20s and still unsure of what the future held for him.

He pokes fun at Doordarshan's Krishi Darshan, his elder brother's paunch, the average Punjabi's love for alcoholic spirits, Amritsar's obsession with kulcha and Mumbai's noon-and-night poha fixation. None of these is blindingly original - if anything, they are well-worn cliches of the popular imagination. The routine turns far more useful when he reveals how Mumbai first changed him for the better in many respects as he found a foothold in the entertainment industry and then how he had to struggle to cope with the repercussions of success and stardom nearly pushing him over the edge.

Among the stories that Sharma narrates, one centres on an initially awkward but eventually salutary encounter with Shah Rukh Khan. Another alludes to the IPL outfit Mumbai Indians, its owner Nita Ambani and key team member Harbhajan Singh. That they all ended reasonably well suggests that Kapil Sharma was always, notwithstanding the highs and lows he has been through, Fortune's favourite child.

Is that why he appears not to be all that empathetic towards those who aren't as lucky as him? Although it is apparent that he came up the hard way - he repeatedly refers to his modest background, his days as a back-up singer and a theatre performer and his first pointless trip to Mumbai where all he did was discover the after-effects of toddy - he has a rather dismissive stance on people less successful than him. The routine is littered with condescending references to cooks, drivers, beach masseurs and hawkers. Not funny!

Parts of the stand-up act focus on the troubles that Sharma brought upon himself by taking on the most powerful man in the land via tweets that he unleashed one night after he had a peg too many. Social media trolls attacked him viciously and all but drove him out of the country. He ended up running up a huge bill as he hid in a no-Internet room in a hotel in the Maldives until the storm blew over.

As he goes along, Sharma takes measured jabs at the man he refrains from naming "because he is the Prime Minister". He mentions Mann Ki Baat in an unrelated context. Tangentially, mentioning kulcha and dhokla in the same breath, he brings up the subject of those dreaded 8 PM announcements that have a whole nation on tenterhooks.

The tougher part out of the way, Sharma eases into a string of intimate anecdotes designed to conjure up the image of a spirited ingenue who landed in Mumbai to become a singer but ended up making a career out of peddling earthy, inoffensive humour. That is precisely what is on offer in abundance in Kapil Sharma: I'm Not Done Yet. But whatever wit there is in the performance borders on the anaemic. For good measure, Sharma throws in a large helping of filial emotions pertaining primarily to his reminiscences about his father. He also allows his wife, Ginni, her moment: she roasts him a bit and then is heard no more.

The jokes that Sharma cracks and the stories that he tells in front of a suitably socially-distanced studio audience are presented as an extension of the heart-to-heart he had with his therapist when depression set in. They add up to a composite insight into his small-town, middle-class upbringing, his ingrained inhibitions and, no less important than all the other things that he touches upon, the wages of success and fame, not the least of which is the dichotomy of a celebrity thriving on mass adulation but having to retreat into a shell once he is away from the public glare.

Verdict: Kapil Sharma, in his first Netflix comedy special, does occasionally tickle the funny bone as well as reveal a few bitter home truths reflected in his personal journey from Amritsar to Mumbai. But that is about it.

If you are looking for substantial food for thought and some scintillatingly daring scything down of holy cows, temper your expectations forthwith. This is Kapil Sharma. His brand of comedy does not go after gods with feet of clay.

Kapil Sharma: I'm Not Done Yet is sanitized, tread-with-care fare: funny in parts but never piercing enough to make a deep, lasting dent on cultivated pretences.