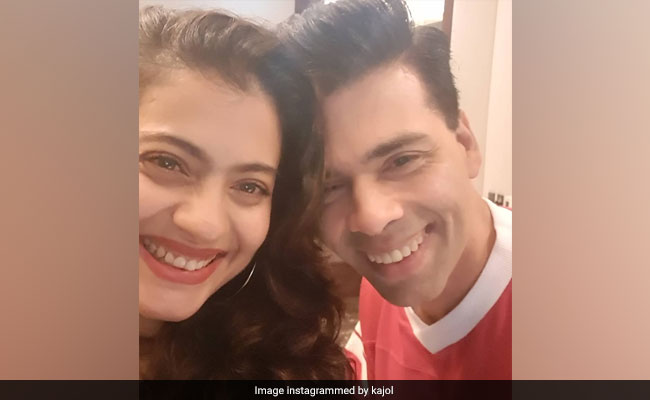 Karan Johar was bombarded with congratulatory wishes after he unveiled his wax statue at Madame Tussauds, Singapore on Thursday, but Kajol's post was a clear winner. The Helicopter Eela actress was very excited to see Karan Johar's wax statue and shared a special post in order to wish her best friend. Kajol shared a picture of herself along with Karan and added a dash of her signature humour to the post. "With the real thing. Congrats Karan Johar. Waxed and how," wrote Kajol. Karan Johar has not responded to Kajol's post as of now but we would love to see his reaction. Meanwhile, check out Kajol's post here:

With the real thing ;) congrats @karanjohar. Waxed and how .....

WAXED!!! At @mtssingapore #madametussauds !! What fun with my mom @hiroojohar and my family!!!!! @anushkaskhanna @priyankaskhanna #masi #payal and my surprise from friends who are too shy to be named!!!

Karan Johar's protege Varun Dhawan also congratulated the filmmaker in a special way. The actor shared a picture of Karan along with his wax statue and captioned it: "With the boss. Couldn't be there to congratulate you in person but hey, I'm still there in wax."

With the boss @karanjohar. Couldn't be there to congratulate u in person but hey I'm still there in wax pic.twitter.com/wq78OUzWbP

Kajol and Karan Johar are a part of a close-knit circle, which also includes Shah Rukh Khan and filmmaker Farah Khan. Kajol has also featured in many of Karan Johar's films. The duo have worked together in films like Kuch Kuch Hota Hai, Kabhi Khushi Kabhie Gham... and My Name Is Khan.