Kajol Perfectly Sums Up 'Mid-Week Feelings' In This Throwback Pic 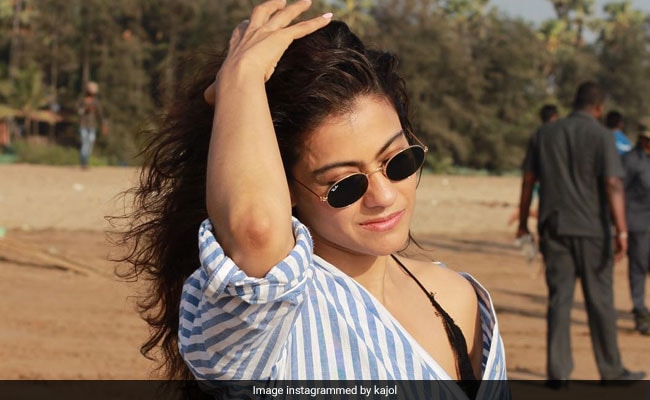 Doesn't Kajol's expression in her latest Instagram post make you feel that the weekend is really far? On Wednesday, Kajol shared a picture on her Instagram profile, which perfectly encapsulates the essence of mid-week blues. The 44-year-old actress shared a throwback picture from the sets of her 2018 film Helicopter Eela and captioned the photo: "Mid-week feelings." She added the hashtags "#midweekmindset" and "#helicoptereela" to the post. Kajol's post received over 2 lakh likes on Instagram. Several interesting comments popped up on her post. "This is relatable," wrote a fan. A section of the Internet thought that the picture was taken in the Nineties. "This reminds me of Kajol in Baazigar, wrote a fan. "You look like the Baazigar girl all over again," read another comment.

Anyone who has been avidly following Kajol on social media would know that the actress knows how to brighten up even the simplest of picture with her interesting captions. Last month, Kajol shared a picture of herself on her Instagram profile and she captioned it: "Whiling away the week.... It's a hmmmmm day."

Kajol frequently shares throwback pictures on her Instagram profile and we simply love it when that happens. Take a look at some of the pictures here:

One from Mr Menons archive ..... when my hair touched my waist ...#sapne #arrahman #music #funmemories

Wishing everyone a light filled bright happy prosperous Diwali. Let the light in your houses echo in your hearts and let's light up the world with our positivity instead of crackers ;) .

On the work front, Kajol was last seen in Pradeep Sarkar's 2018 film Helicopter Eela, co-starring Riddhi Sen and Neha Dhupia. Kajol has not announced any projects as of now. However, according to a recent Mumbai Mirror report, the actress recently shot for a song in Om Raut's forthcoming film Taanaji: The Unsung Warrior, which stars her husband Ajay Devgn in the lead role.