Kader Khan's Son Sarfaraz On His Bollywood Career: "It Was Fulfilling While It Lasted" 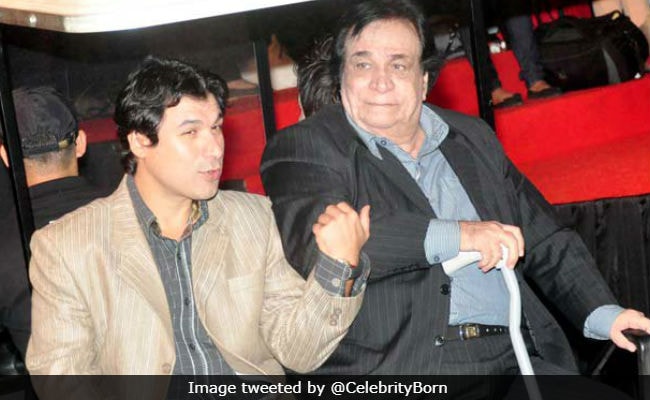 A file photo of Sarfaraz with his father Kader Khan. (Image courtesy: Twitter)

Kader Khan's son Sarfaraz buried his father on Thursday in Toronto, Canada, where their entire family now lives and speaking to news agency IANS about his short-lived career in films Sarfaraz said it was "fulfilling while it lasted." Sarfaraz has featured in films like Wanted and Tere Naam, which were headlined by Salman Khan. However, Sarfaraz added that he doesn't want to revive his Bollywood career. "Whatever I did as an actor was fulfilling while it lasted. But it's behind me. I am very happy with what I'm doing now in Canada," Sarfaraz told IANS.

Sarfaraz debuted in Bollywood with 2002 film Kya Yehi Pyaar Hai and he went to take up small roles in films such as Milenge Milenge, Once Upon a Time in Mumbaai Dobara and Ramaiya Vastavaiya - also his last onscreen appearance. After a brief career in films, Sarfaraz moved to Canada. "Canada was my father's home during his last years. All of us have moved to Canada," IANS quoted Sarfaraz as saying.

In a previous interview with IANS, Sarfaraz criticised the film industry's "out-of-sight-out-of-mind mentality." He told IANS: "My father always told us, his sons, not to expect anything from anybody and we grew up with the belief that one must do what is required in life and expect nothing in return."

Sarfaraz was also asked about Govinda's tribute to Kader Khan, in which he said that late actor was like a "father figure" to him. Sarfaraz told IANS: "Please ask Govinda how many times he inquired about his father figure's health. Has he even bothered to call us even once after my father's passing away? This is the way our film industry has become. There are no real feelings for those who have contributed to Indian cinema when they're no longer active."

However, Sarfaraz said that his father remembered Amitabh Bachchan fondly in his final days and added: "I know the love was mutual." Kader Khan wrote dialogues for Amitabh Bachchan in several films helmed by Manmohan Desi and Prakash Mehra. They've also co-starred in films like Sooryavansham, Suhaag, Coolie and Shahenshah.

Kader Khan died after a prolonged illness in Canada on December 31. He was surrounded by his family in his final days.