She looks gorgeous in a brown monokini in the pictures 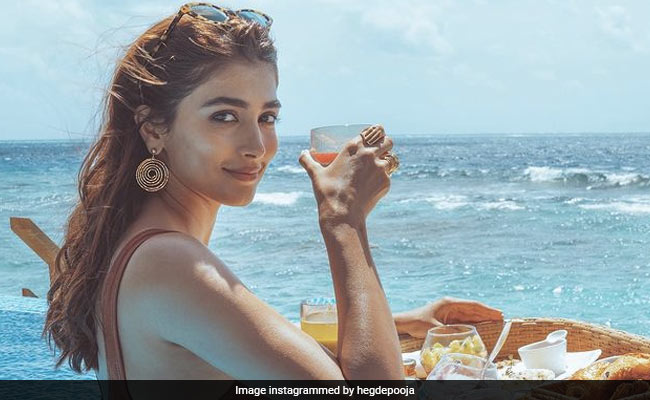 Pooja Hegde has finally joined the list of celebs who picked Maldives as their vacation spot this year. The actress, who was last seen in Most Eligible Bachelor, packed her bags and flew to the beach destination this weekend, looking for some "extraordinary experiences." On her social media profile, Pooja Hegde shared a set of pictures of herself enjoying a floating breakfast in a pool. She looks gorgeous in a brown monokini. "Just an ordinary girl looking for extraordinary experiences," the actress wrote in the caption and added a brown heart icon. Check out her pictures from her vacation here:

Pooja Hegde is in a "vacay mode" and she is just getting "recharged" for her next project. The actress, on Saturday, posted a picture of herself from the Maldives and wrote: "Cye later folks. #vacaymode #restandrecharge." Take a look:

Pooja Hegde made her acting debut with a 2012 Tamil film Mugamoodi. She later joined Bollywood with Ashutosh Gowariker's Mohenjo Daro, in which she co-starred with Hrithik Roshan. She has also worked in films such as Duvvada Jagannadham, Housefull 4, Saakshyam, Maharshi and Ala Vaikunthapurramuloo, in which she starred alongside Allu Arjun.

The actress' last movie was Akhil Akkineni's Most Eligible Bachelor and she starred as his love interest in the film.

Pooja Hegde will next be seen alongside Prabhas in Radhe Shyam, in Cirkus with Ranveer Singh, in Chiranjeevi's Acharya and in Beast, co-starring Vijay.

Radhe Shyam is slated to release on January 14 next year.