Just A Pic Of John Travolta With Anupam Kher. Can You Spot Anil Kapoor In The Background?

"It was nice to know that he was a great admirer of my film called Bend It Like Beckham," Anupam Kher wrote about John Travolta 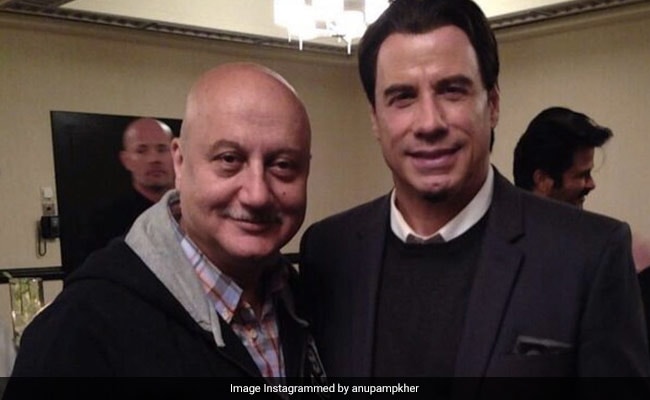 Actor Anupam Kher, on Monday, updated his Instagram feed with a photo of himself and Hollywood star John Travolta. Anupam, 65, also shared the story behind the photo, which also features Anil Kapoor in the background. Sharing the photo, Anupam Kher wrote that he met the Pulp Fiction actor at the 12th IIFA Awards in Toronto, Canada in 2011 and added that he felt "nice" after he got to know that John Travolta "was a great admirer" of his film 2002 film Bend It Like Beckham. "Story of this picture: I met John Travolta at the IIFA in Toronto. Since we Indians know more about Hollywood actors and they are very rarely aware of the work that we do in Indian cinema, it was nice to know that he was a great admirer of my film called Bend It Like Beckham. He was happy to take a picture with me and I obviously was thrilled," wrote Anupam Kher.

"This must be one of the only times when my friend Anil Kapoor was in the background," he added. Anupam Kher and Anil Kapoor, co-stars of films like Karma, 1942: A Love Story, Vijay, Lamhe, Heer Ranjha, Ram Lakhan, Tezaab and Parinda, share a good rapport.

Anupam Kher has also worked with the iconic actor Robert De Niro in 2012 movie Silver Linings Playbook. The 65-year-old actor has featured in a couple of international projects.

About John Travolta, the 66-year-old actor is best-known for his performances in hits like Saturday Night Fever, Grease, Get Shorty, Hairspray, Broken Arrow and Face/Off.