Joaquin Phoenix's Joker Is Having A Billion Dollar Laugh At The Box Office. First R-Rated Film To Do So

Joker, which is made on a budget of $62.5 million, has checked off of a list of firsts with its billion dollar feat 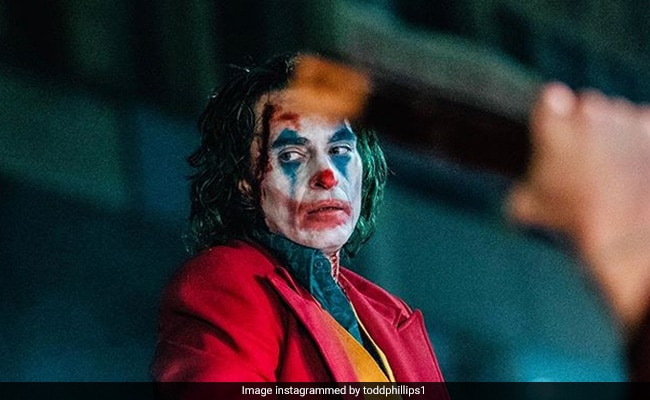 Joaquin Phoenix as in and as Joker (courtesy toddphillips)

Joaquin Phoenix's Joker, produced by Warner Bros. Pictures and DC Films, makes a box office record. Joker, which has clocked almost a month in theatres, made $998 million in terms of worldwide collection as of Thursday, reported Forbes on Friday, adding: "So today should be the day that Joker passes the $1 billion mark." In doing so, Joker, which is made on a budget of $62.5 million, has checked off of a list of firsts - it is the first R-rated (restricted) movie to cruise past the $1 billion mark, reported Forbes. Joker is also the first solo comic book movie (R-rated and not part of a series) to score the feat without China release. The Forbes report states "what makes Joker such a jaw-dropper" is unlike previous billion-scoring films, Joker has not even released in China, whose box office collections helped previous films make it to the billion dollar notch.

As we head into our 6th weekend around the world, some more BTS. Don't read too much into them, just putting out random ones as I find them. Have a great weekend! #Joker is (still) everywhere. @nikotavernise. Also my main man and DP @lawrencesherdp

Few weeks into Joker's release, it became Warner Bros. Pictures and DC Films' most profitable comic book movie ever, reported Forbes. With a budget of $62.5 million, Joker is also the cheapest film to cross the billion dollar mark.

The Hollywood Reporter states Joker's billion dollar feat makes it the fourth DC film to do so after Aquaman ($1.15 billion), The Dark Knight Rises ($1.084 billion) and The Dark Knight ($1.005 billion). Joker is also the 13th live-action comic book to score a billion dollars at the box office. Joker's closest R-rated billion-dollar rivals can be Deadpool ($783 million) and Deadpool 2 ($785 million), the report added.

Some fun “behind the scenes” images with Joaquin and I. We laughed a lot on set. Will post more... all photos by the great @nikotavernise

Joker opened to great reviews in October with Joaquin Phoenix's portrayal of the DC villain being critically acclaimed. In his review for NDTV, Saibal Chatterjee wrote: "The director of Joker leans heavily on the astounding brilliance of an emaciated-for-the-role Phoenix to create an accidental moral disruptor so strong that he blows everything away like a gust from hell. The actor, all skin and bones, fires on all cylinders."