Jennifer Aniston Welcomed To Instagram By Courteney Cox With Iconic F.R.I.E.N.D.S Line: 'It Sucks. You're Gonna Love It' 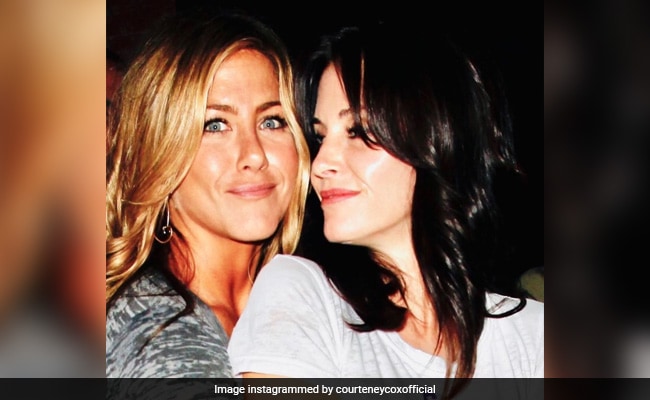 Jennifer Aniston made her Instagram debut by posting an epic selfie with her reel and real F.R.I.E.N.D.S and there is no question of her fans keeping calm. The 50-year-old actress, who now has over 5.5 million fans (and very much counting), received the warmest welcome from her best friend and F.R.I.E.N.D.S co-star Courteney Cox. The Scream actress posted a picture of herself and Jennifer on her Instagram profile with one of the coolest captions ever. In her post, Courteney made a reference to a popular F.R.I.E.N.D.S dialogue - "Welcome to the real world. It sucks. You're gonna love it" and she modified it to: "Welcome to the social media world... It sucks. You're gonna love it!"

As any F.R.I.E.N.D.S fan would know, Courteney Cox's character Monica Geller says the aforementioned dialogue to Jennifer's character Rachel Green, when the latter chops the credit cards that were sponsored by her father and decides to take a job as a waitress at Central Perk, the coffee shop frequented by the F.R.I.E.N.D.S.

Hi Jen! Welcome to the social media world...it sucks. You're gonna love it!

Jennifer Aniston made her Instagram debut on Tuesday night. Her first post was a selfie with her F.R.I.E.N.D.S co-stars David Schwimmer, Matt LeBlanc, Matthew Perry, Lisa Kudrow and Courteney Cox, of course. "And now we're Instagram FRIENDS too. Hi Instagram," the actress captioned her post. Lisa, who played Phoebe Buffay on F.R.I.E.N.D.S, left a comment (one among many from celebrities such as Gwyneth Paltrow and Kate Hudson), writing simply, "Woo hoo! WOOooooOO!!"

Jennifer Aniston might have been a social media recluse earlier but she made frequent appearances on her bestie Courteney Cox's profile. A few days ago, Courteney posted a picture with Jennifer Aniston and Matt LeBlanc aka Joey Tribbiani. "A rare night and I love it," the actress captioned it.

A rare night and I love it.

The game-changing F.R.I.E.N.D.S is undoubtedly one of the most popular sitcoms ever. The show first aired in 1994 and ran for 10 seasons. 25 years later, it's still a hit on streaming platforms.