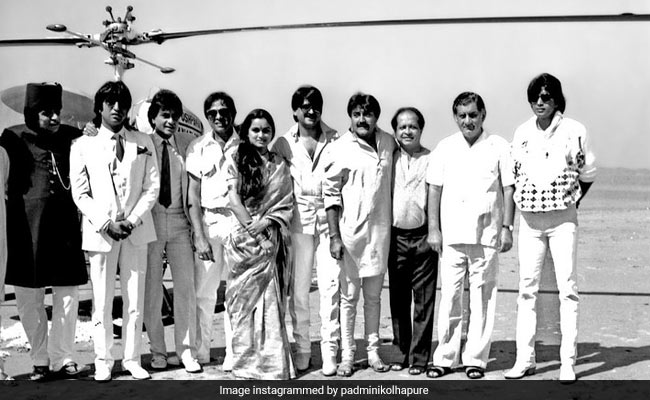 Our day couldn't get any better as we chanced upon a throwback picture that features popular actors of the 70s and 80s - Jeetendra, Mithun Chakraborty, Kader Khan, Vinod Mehra - in a single frame. Making the best use of Throwback Thursday, actress Padmini Kolhapure shared never-seen-before pictures of the veteran stars from the muhurat of their 1988 film Mar Mitenge. Padmini Kolhapure's husband Pradeep Sharma produced the film and Kawal Sharma, known for his work on movies such as Jeete Hain Shaan Se and Namak, directed it. Mar Mitenge also starred Shakti Kapoor, who is married to Padmini Kolhapure's sister Shivangi.

In the first black and white photo, Kader Khan, Shakti Kapoor, Jeetendra, Vinod Mehra, Padmini Kolhapure and Mithun Chakraborty can be seen posing for the camera with Kawal Sharma, Pradeep Sharma, who is famously known as Tutu Sharma in the film industry, lyricist Anand Bakshi and music composer Laxmikant of the renowned composer duo Laxmikant-Pyarelal. The other pictures feature Padmini posing with clapboard and performing puja at muhurat with her husband.

Jeetendra has co-starred with Mithun in many movies, including Swarag Se Sundar, Jaal, Aisa Pyaar Kahan and Dhuan while his films with Vinod Mehra are The Burning Train, Locket, Sanjog, Yeh Desh, Aulad and Jaani Dushman among many others. Kader Khan also worked with Mithun Chakraborty, Jeetendra and Vinod Mehra in several films in the Seventies and Eighties.