Janhvi Kapoor Baked A Cake For Khushi Kapoor. Her Reaction Is Priceless

In coronavirus lockdown, the Kapoor sisters are doing it all - from making TikTok videos to baking cakes. 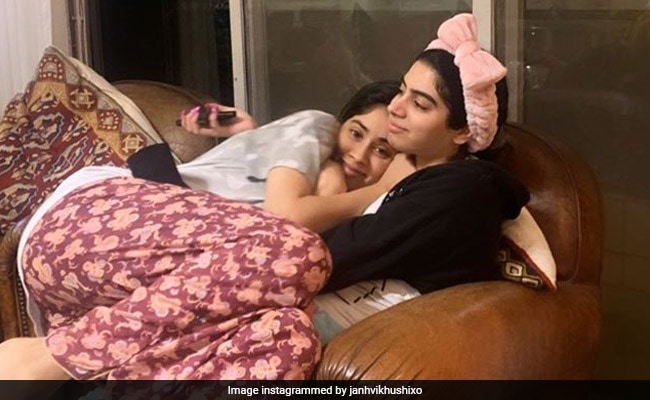 Janhvi Kapoor and Khushi Kapoor's sibling times are just too much fun. In coronavirus lockdown, the Kapoor sisters are doing it all - from making TikTok videos to baking cakes. On Tuesday, Janhvi treated us to a hilarious snippet of their quality time. Janhvi shared a set of stories on her Instagram profile and they are just too cute. Janhvi made her "special carrot cake" for Khushi and asked her to eat. In the video Khushi can be seen little reluctant to eat the cake but after taking a bite, she says, "it is good." But when Janhvi asks her to eat more, Khushi says, "I don't want it." LOL! Take a look:

The Kapoor sisters never fail to drive our lockdown blues away with their fun videos. A few days ago, they trended a great deal for taking up the "who is more likely to" challenge on TikTok. In the video, when asked who is likely to get married first, the Kapoor sisters spilled the beans - Khushi. When asked, who will have babies first, they again had the same answer - Khushi it is.

Also learnt that I like to write... p.s. wrote this 3 days ago since we started self isolating a little before the lockdown and it had already been a week for me by then.

Janhvi and Khushi are daughters of late actress Sridevi and film producer Boney Kapoor. Janhvi made her Bollywood debut with the film Dhadak where she starred opposite to Ishaan Khatter. Khushi, who reportedly wants to become an actress, flew to New York for higher studies last year.

On the work front, Janhvi was last seen in a segment of Netflix's Ghost Storie. Janhvi has an impressive line up of films for this year. She has films such as Takht, Roohi Afza, Dostana 2 and Gunjan Saxena: The Kargil Girl to look forward to.