It's Just A 'Perfect Day' For Shahid Kapoor And Daughter Misha

This is how Shahid and Misha spent their day 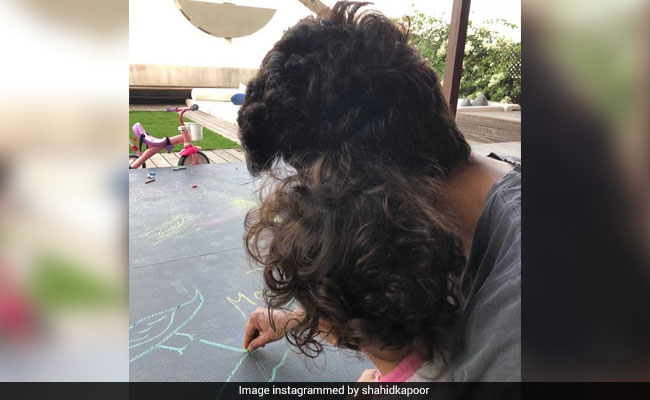 New Delhi: Ahead of Padmaavat's release, guess what actor Shahid Kapoor is upto? Well, he is treating himself to a wonderful time, of which 'perfect days' are made of. The 36-year-old actor Instagrammed a photo of himself and his one-year-old daughter Misha, captioning it as: "Perfect day." In the photo, Misha finds herself perched on Shahid's lap and the duo are busy doodling with colourful chalks on what looks like a black board of sorts. The photo is so adorable that netizens could not but notice it even on a lazy Friday evening. Comments and likes started pouring in within minutes and the photo garnered over 165,987 'likes' within an hour. Several of Shahid's followers also highlighted that it's the perfect way to spend time with your daughter and we can't agree more.

"Awwww, so cute," read one comment while the other wrote: "Shahid giving perfect dad goals."

Here is the picture.

Just a few days ago, a photo of Misha Kapoor taking dance lessons from grandmother Neelima Azeem was doing the rounds on the Internet. Misha was adorable in a churidar while grand mom Neelima made sure to teach some beautiful kathak steps to her little granddaughter. Thank You Mira Rajput for such a cute picture.

Misha generally features on dad Shahid's and mom Mira's Instagram handles. Sometimes the little girl is sandwiched between her parents while sometimes, Shahid and Mira give us a glimpse of their play date with Misha.

Best times with my angel.

I'll be there to catch you when you fall, but I'll also be the one to jump around with you #bunnyrabbithophophop

Promoted
Listen to the latest songs, only on JioSaavn.com
Cute, aren't they?

Shahid Kapoor and Mira Rajput married in 2015 and the couple welcomed their daughter Misha in August 2016. The couple made their first appearance on television together at beginning of this year that, joining the sets of Koffee With Karan. More recently, the couple made their first appearance on a magazine cover and have featured in a few photoshoots. On the work front, Shahid Kapoor was last seen in Rangoon and his next film Padmaavat will hit the screens on January 25.