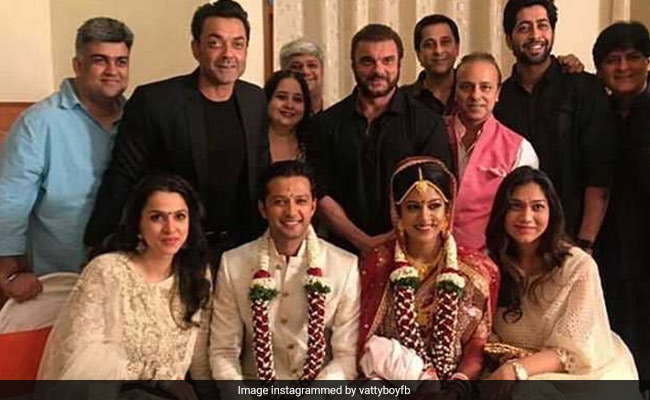 New Delhi: Actors Ishita Dutta and Vatsal Sheth got married today at ISKON Temple in Juhu, Mumbai. The couple featured together in TV show Rishton Ka Saudagar - Baazigar. Ishita and Vatsal opted for a simple marriage with close friends and family members. None of the guests have shared pictures on social media so far but thanks to Ishita and Vatsal's fans, who gave us a glimpse of the beautiful wedding. Ishita looked stunning in a red lehenga while Vatsal was handsome in a white sherwani. In one of the pictures, shared on Instagram, the couple are all smiles and posing for a perfect picture while in the other, Ishita and Vatsal were photographed with actors Sohail Khan and Bobby Deol.

Omg omg omggg!! Congratulations to the newly married couple Vatsal sheth and Ishita dutta!!this was a surprise for sure but iam SOOOO HAPPY FOR YOU GUYS So happy for you vatty that you finally found your other half ! God bless both of you guyssss #vatsalsheth #ishitadutta #Ishsal

The fans have congratulated the newly wedded couple and have sent their good wishes.

Promoted
Listen to the latest songs, only on JioSaavn.com
Vatsal Sheth started his acting career with television series Just Mohabbat. He also starred in films like Taarzan and Heroes. Vatsal also featured in Ek Hasina Thi which ended in 2014. He is currently seen in Haasil. Ishita Dutta, who is Tanushree Dutta's younger sister, will star in Firangi opposite Kapil Sharma. She debuted in Bollywood with Ajay Devgn's Drishyam. Firangi will hit the theatres on December 1.

We wish Vatsal and Ishita a very happy married life.