"Today, I feel sad that a girl child got deprived of Irrfan's parenting of a girl," wrote Sutapa 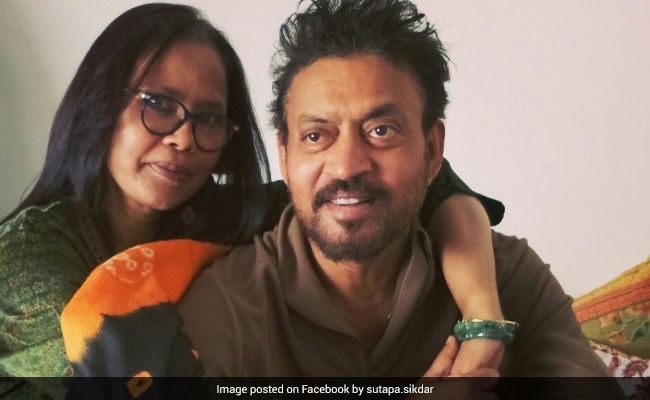 Irrfan Khan's wife Sutapa, in a Facebook post on Daughter's Day, revealed that she and the actor "desperately" wanted to have a daughter. Irrfan, who died on April 29 this year, and Sutapa have two sons - Babil and Ayaan. In her post on Sunday, Sutapa shared the story of her second delivery and said that after she gave birth to a son, her doctor couldn't break the news to the couple and instead told them: "Congratulations! Healthy child!" She wrote: "Me and Irrfan wanted to have a daughter so desperately that on my second delivery my doctor could not utter the word son and said instead, 'Congratulations! Healthy child!' I was disappointed. Yes, I was. That day for us and today, I feel sad that a girl child got deprived of Irrfan's parenting of a girl." Daughter's Day was celebrated across India on September 27.

Remembering her husband Irrfan, Sutapa Sikdar often shares emotional post on Facebook. In one of her previous posts, she posted a picture of themselves and quoted a verse from Sufi poet Rumi's poem A Great Wagon for this caption: "'Out beyond ideas of wrongdoing and right doing there is a field. I'll meet you there. When the soul lies down in that grass the world is too full to talk about.' It's just a matter of time...milenge, baaten karenge... Till we meet again "

On April 29, Irrfan Khan lost his battle with a rare form of cancer and died at the age of 53 in Mumbai's Kokilaben Dhirubhai Ambani Hospital. He is survived by Sutapa and their two sons.

A few days after the actor's death, Sutapa wrote a heart-rending note, which read: "The only thing I have a grudge against him is; he has spoiled me for life. His strive for perfection doesn't let me settle for ordinary in anything. There was a rhythm which he always saw in everything, even in cacophony and chaos, so I have learnt to sing and dance to the music of that rhythm, even with my tone-deaf voice and two left feet."

On Monday, Babil also dedicated a post to his father on Instagram. He posted a picture of Irrfan Khan and wrote: "I'm working Baba. You pushed through demons, up in your feelings, no one gets it, no? I'd give every cell in my presence to remember your skin, my spinal cord will rotate and my soul can implode, in a search to feel you close, I wish I would have known how it feels to end, so I can begin."

I'm working Baba. You pushed through demons, up in your feelings, no one gets it, no? I'd give every cell in my presence to remember your skin, My spinal chord will rotate and my soul can implode, in a search to feel you close, I wish I would have known how it feels to end, so I can begin. Why are you surprised? It's the job of the Politician to choose to lie, and when I'm bleeding, I know, sleep is just death being shy. I pray for you, our farmers, in our self-illusiveness we thought we were better, I hope we can surrender. I hope we find a way. I miss you India. (No political comments please, this is not a political expression.)

Irrfan Khan, who worked in several critically acclaimed films such as Paan Singh Tomar, The Namesake, Maqbool, Haasil, Haider, Piku and Talvar among others, was last seen in Angrezi Medium, which is a sequel to his 2017 hit Hindi Medium.