Into The Wild: "It's going to be fun," Ajay Devgn says in the trailer while Bear Grylls also picks up a Hindi word: "My stage, my elaka," he says. 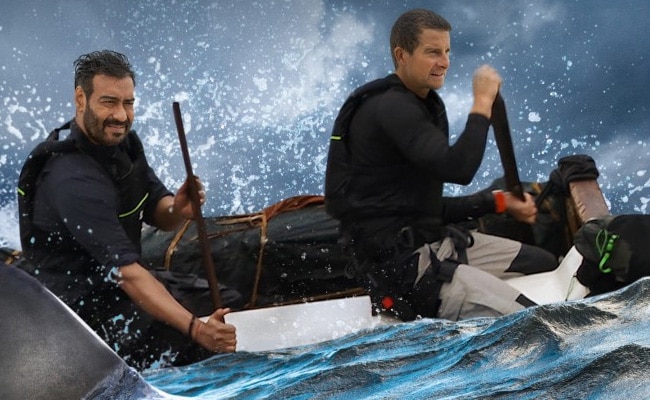 Into The Wild Trailer: Ajay Devgn and Bear Grylls on a poster

Ajay Devgn opened up about his experience of shooting for Into The Wild and thanked Bear Grylls for keeping him "safe". In a statement, Ajay Devgn said: "This is my first ever expedition into the wild and I can tell you it wasn't child's play! My father was an action director and in my career span of 30 years in the Indian industry, I have had the fortune to play several roles including some dangerous action ones too. And, this was one of those times when I had to put those learnings to the test again. I'm so glad this opportunity came my way, it helped me explore and go beyond my comfort zone. A special salute to Bear who has been inspiring millions to explore and develop a much-needed relationship with nature, and of course to keep me safe in the wild. From hungry jungles to the depths of the ocean, Bear knows it all!"

Meanwhile, Bear Grylls talked about his take-away after sharing adventures with Ajay Devgn in the wild: "To get to take the legendary Ajay into the wild and have an adventure with him was a privilege. Desert islands are always tough to survive on and Ajay showed total commitment to do what we needed to get out in one piece. He was also incredibly honest, sharing so many insights into his life and career and I value that honesty so much. One thing that I've learnt about Ajay is he is a quietly spoken man, but he is a man with great love and strength in his heart."

Talking about Ajay Devgn's episode of Into The Wild, Megha Tata, Managing Director-South Asia, Discovery Inc. added: "Into The Wild with Bear Grylls is one of our most acclaimed and loved series and with the new episode, the motive was clear - to make it bigger, better and widen our audience base by bringing forth a deadly combination of thrill, entertainment, and adventure through two iconic daredevils, Ajay Devgn and Bear Grylls. The show has been appreciated worldwide and we expect to land big with this special season."

into the wild trailerajay devgn