Inside Priyanka Chopra And Nick Jonas' Famjam At US Open 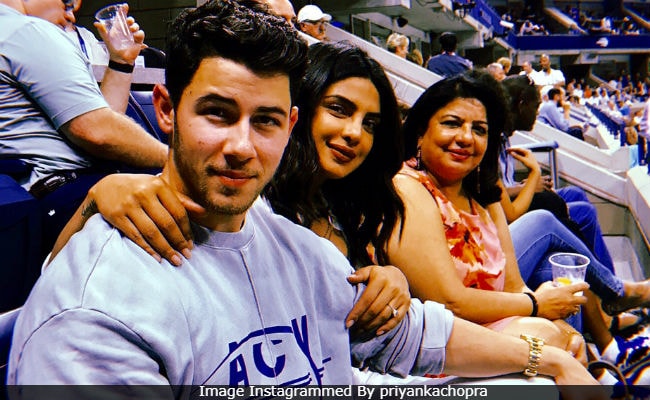 Folks, Priyanka Chopra and Nick Jonas are back in New York from their Mexican holiday. On Wednesday, the couple watched a match at the ongoing US Open tournament with family. Priyanka's mom Madhu Chopra accompanied them, along with Nick's brother Joe and his girlfriend Sophie Turner. Pictures from their outing have been shared by both Priyanka and Nick on Instagram. "It's a famjam at the US Open," Priyanka captioned her post, which features pictures of the couple with Madhu Chopra, Joe and Sophie. Priyanka opted for a white Fendi outfit and her fiancé Nick complemented her in a grey sweatshirt and black trousers.

Fanclubs have also curated pictures of Priyanka and Nick exiting her New York apartment with Joe and Sophie to watch the match.

Joe Jonas and Sophie Turner have been previously spotted twice at the US Open. Just on Tuesday, Joe, Sophie were seen enjoying a match with Kevin Jonas and his wife Danielle. A video of Joe and Kevin, flossing during the match, was shared widely on social media. "My boys have done many great things but this one is special," their father Paul Kevin Jonas wrote.

Over the weekend, the Internet chanced upon these pictures of Joe and Sophie from the US Open stands. Sophie Turner is best-known for playing the role of Sansa Stark in the Game Of Throne series.

Priyanka Chopra, 36, and Nick Jonas, 25, got engaged in Mumbai last month in an intimate roka ceremony. The couple haven't announced a wedding date yet.