Gokulan got married to his long-time girlfriend Dhanya on Thursday 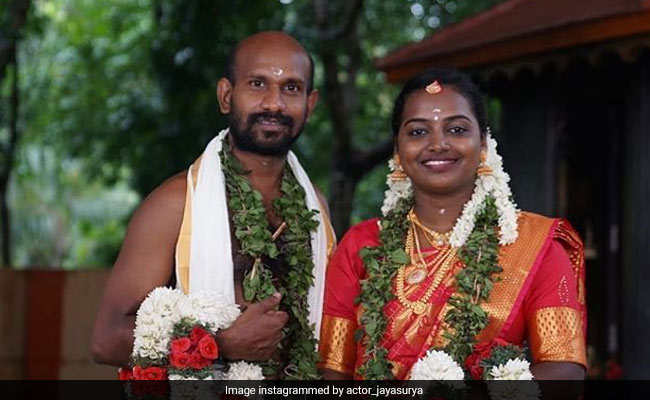 Jayasurya shared this pic of Gokulan and Dhanya (courtesy actor_jayasurya)

Malayalam actor Gokulan, who is known for his role in critically acclaimed 2013 satire Punyalan Agarbattis, had a lockdown wedding on May 28. The actor got married to his long-time girlfriend Dhanya on Thursday. As per a Hindustan Times report, the wedding took place at a temple in Kerala's Ernakulam amid the nationwide lockdown. Gokulan and Dhanya got married in the presence of just family members, as is suggested in the virtual wedding card, glimpses of which have been shared in stories on the actor's unverified Instagram profile. "We begin to love in this pandemic season. We value your prayers and greetings in your absence. Gokulan and Dhanya, May 28, 2020," said what appears to be the wedding card, dedicated to the couple's well-wishers, who couldn't be invited to the wedding because of the lockdown. 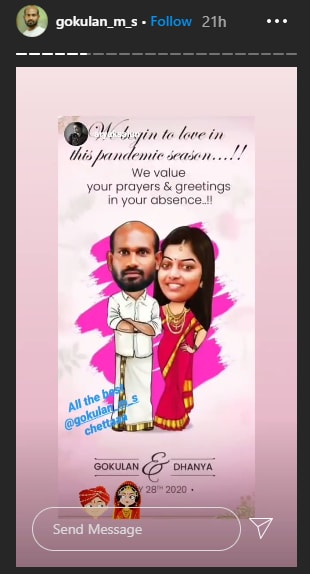 Meanwhile, Malayalam star Jayasurya, who headlined the cast of the film Punyalan Agarbattis, congratulated the newly-wed couple with a post on Instagram. He also shared a photo of Gokulan and Dhanya from their wedding. Malayalam actor Tovino Thomas sent best wishes to the newly-married couple in a post. He also shared a few photos from the wedding, in which Gokulan and Dhanya can be seen wearing masks, which match their respective wedding attires.

Earlier this month, Telugu actor Nikhil Siddhartha got married to Dr Pallavi Varma in a low-key wedding in Hyderabad. Photos from the lockdown wedding went crazy viral on the Internet. In a BTS video shared from his wedding, Nikhil had said: "Keeping in mind the government guidelines on COVID-19... All Guests were screened and safety precautions taken at Nikhil-Pallavi wedding."

Keeping in mind the Govt Guidelines on COVID19... All Guests were screened and safety precautions taken at #NikhilPallavi Wedding today. Here is Raja Ravindra Entering the ceremony and being screened #lockdownwedding #nikpal

South star Rana Daggubati also got engaged to Miheeka Bajaj earlier this month in a close-knit gathering. The couple are expected get married sometime this year.

India is currently in lockdown mode till May 31; restrictions have been eased to different levels in various parts of the country.