In Which Shah Rukh And Aamir Khan Star Together 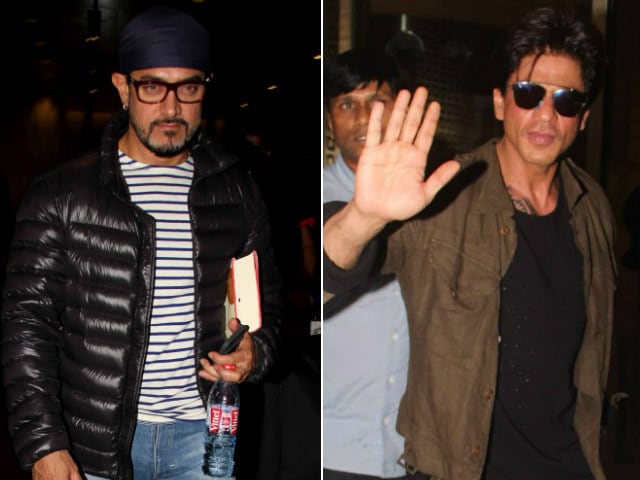 New Delhi: No, there isn't a Shah Rukh Khan plus Aamir Khan film in the making yet. We would love such collaboration but for now, the lot of hopefuls will have to be satisfied with a picture starring the two Khans together. Shah Rukh and Aamir, both 51, met at a party recently and took a selfie, which SRK shared with the caption: "Known each other for 25 years and this is the first picture we have taken together of ourselves. Was a fun night." Both Shah Rukh and Aamir were dressed in white. Aamir, who soon be seen in Thugs Of Hindostan kept his unkempt beard look from the film while Shah Rukh looked suave.

Known each other for 25 years and this is the first picture we have taken together of ourselves. Was a fun night. pic.twitter.com/7aYKOFll1a

Filmmaker Karan Johar also met the two Khans at the party and he shared another picture. The Ae Dil Hai Mushkil director did not feature in the photograph but tweeted saying: "It was such a fun evening." It is a rare happening - for Aamir Khan and Shah Rukh to be in the same picture, but it did happen and we love it.

Happy 50 Ajay!! Have the best decade ever!! It was such a fun evening!!! pic.twitter.com/zQN6MJPIjr

Ahead of the release of Dangal, Aamir Khan invited SRK for a special screening of the Nitesh Tiwari-directed film but to the best of our knowledge, Shah Rukh could not make it as he was "busy." Shah Rukh was filming the remaining portions of Dear Zindagi, his movie with Alia Bhatt.

Promoted
Listen to the latest songs, only on JioSaavn.com
The Dangal actor and Shah Rukh trended for a good while in December last year, after the Internet realised that the two actors will release their new films within a span of a week in August 2017. Aamir Khan, who produces and has an extended special appearance in Secret Superstar, has blocked August 4 for the film. Shah Rukh will be seen in Imtiaz Ali's Rahnuma, which is scheduled for August 11. This is the first time Aamir and Shah Rukh will be this close with the release dates.

Meanwhile, Aamir Khan rounded off 2016 on a blockbuster note with Dangal while and will next be seen in Thugs Of Hindostan, co-starring Amitabh Bachchan. Shah Rukh Khan is still enjoying the success of his gangster drama Raees, in which he features as a liquor baron from Gujarat. SRK will also play the role of a dwarf in a yet-untitled film with Aanand L Rai and he also has a cameo in Salman Khan's upcoming film Tubelight.