"Such wonderful memories from the muhurat of Andaz Apna Apna," wrote Karisma Kapoor 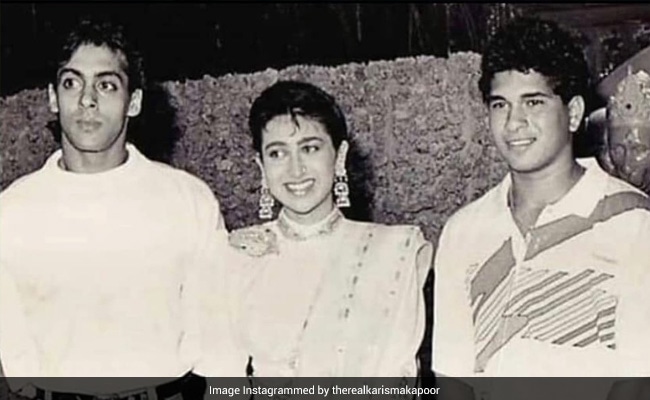 On legendary cricketer Sachin Tendulkar's 48th birthday, actress Karisma Kapoor took us back to the Nineties. Karisma, on Saturday, posted a picture from the muhurat ceremony of her 1994 film Andaz Apna Apna, in which she co-starred with Salman Khan, Aamir Khan and Raveena Tandon, to wish the cricketer. The black and white picture features the actress dressed in a traditional outfit and happily posing with Salman Khan and Sachin Tendulkar. "Such wonderful memories from the muhurat of Andaz Apna Apna. Time really files," she wrote in the caption and added: "Happy Birthday, Sachin Tendulkar. #throwback #preciousmoments."

Here's how Karisma Kapoor wished Sachin Tendulkar on his birthday:

Here's another picture featuring Aamir Khan, Salman Khan, Karisma Kapoor, Raveena Tandon and Sachin Tendulkar from the muhurat of Andaz Apna Apna. This photo has been shared by a fan club dedicated to Indian cinema.

Karisma Kapoor was last seen in the ALT Balaji and ZEE5 web series Mentalhood where she shared screen space with Sanjay Suri, Sandhya Mridul, Shilpa Shukla and Shruti Seth. Her last Hindi film remains Dangerous Ishhq, after which she featured in special roles in films such as Bombay Talkies and Zero.

"We Are So Proud Of You": Sushmita Sen's Birthday Wish For Godchild Aaliyah, 18 Today