In Chennai, Rajinikanth's Lingaa Watched by Fans All the Way From Japan 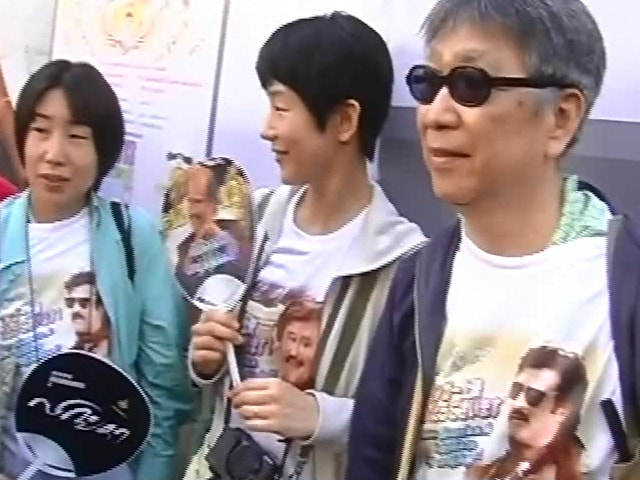 Rajinikanth's fans from Japan outside a theatre showing Lingaa.

Four Rajinikanth fans from Japan have landed in Chennai to watch their superstar's Lingaa from ground zero.

Outside the Kasi theatre in the city which is showing Lingaa, Yasuda Hidetoshi and three other Japanese fans from Osaka drew a lot of attention, wearing Rajini t-shirts and holding Lingaa placards in the shape of hand fans. (Also Read: Rajinikanth's Lingaa Releases Today, Chennai is Beside Itself)

Yasuda, who even speaks Tamil, lists out more than 20 films of Rajinikanth that he has watched. He adds, "I love Rajnikanth's style, action and humility. I have come to Chennai just for Lingaa".

His three Japanese team members, including two women, sing the Tamil superhit number Cauvery Aarum Kaikuthal Arasiyum from Rajini's previous blockbuster Endhiran with so much of enthusiasm and excitement. One of them says, "I love Rajini's Chandramukhi film. Happy birthday, Thalaiva." Today is the actor's 64th birthday. (Also Read - Rajinikanth, Happy Birthday: 5 Things You Didn't Know About Him)

Rajinikanth has a huge fan following in Japan with at least 20 halls screening Lingaa reportedly running houseful. Yasuda says, "I am going to Albert theatre, the ground zero for Rajini mania, to experience Lingaa there." (In Pics - Rajinikanth@64: A Tribute to Thalaiva)

Rajini fans are super excited about their Japanese counterparts flying down to their city. P Sridhar, the Secretary of LIC Rajini Fans Association, says "We are thrilled about these fans. Rajini sir is a global star. The Japanese like swift action and the superstar offers it in plenty."

Promoted
Listen to the latest songs, only on JioSaavn.com
Lingaa co-stars actresses Sonakshi Sinha and Anushka Shetty, and is directed by KS Ravikumar.