"If I Shed The Layers, I'm A Slut": Billie Eilish Tackles Body Shaming Head On

"Though you've never seen my body, you still judge it and judge me for it," said Billie in her monologue 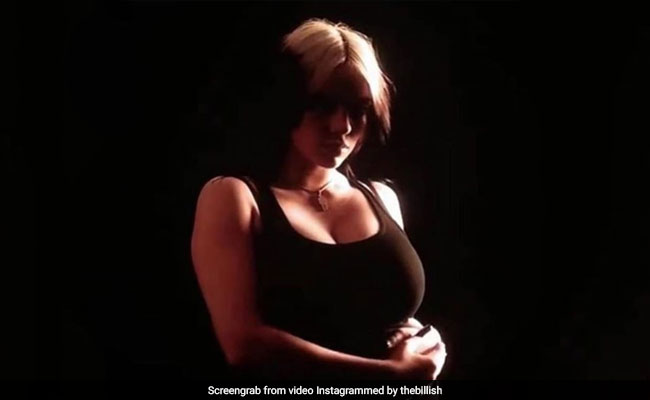 Billie Eilish in a still from the video from her concert. (Image courtesy: thebillish)

Singer Billie Eilish, 18, who sports oversized and baggy clothes at various events, "shed the layers" and made a powerful statement about body shaming in a surprise monologue at a concert in Miami. A video from her performance is doing the rounds on the Internet, in which she can be seen addressing the constant body shaming young women face in the entertainment industry. At the concert, the five time 2020 Grammy-winner played a pre-recorded video of herself taking off her shirt and her tank top before slowly sinking into a pit of black tar. The video was accompanied by Billie's monologue, in which she can be heard saying "You have opinions about my opinions, about my music, about my clothes, about my body. Some people hate what I wear, some people praise it, some people use it to shame others, some people use it to shame me but I feel you watching, always, and nothing I do goes unseen."

"So while I feel your stares, your disapproval or your sighs of relief, if I lived by them, I'd never be able to move. Would you like me to be smaller? Weaker? Softer? Taller? Would you like me to be quiet? Do my shoulders provoke you? Does my chest? Am I my stomach? My hips? If what I wear is comfortable, I am not a woman. If I shed the layers, I am a slut. Though you've never seen my body, you still judge it and judge me for it. Why? You make assumptions about people based on their sizes. We decide who they are. We decide what they're worth. If I wear more, if I wear less, who decides what that makes me? What that means? Is my value based only on your perception? Or is your opinion of me not my responsibility?" she can be heard asking the body shamers in the powerful monologue.

The video from the concert has been shared by several fan pages. Take a look:

During the concert, Billie Ellish performed in baggy clothes, as is tradition. She wore a green sequined shirt and matching shorts, which she paired with black trainers.

Like we said above, Billie Eilish's When We All Fall Asleep, Where Do We Go? won the Album Of The Year Award at the 2020 Grammys while the Record Of The Year award went to her track Bad Guy. She also won the Song Of The Year for Bad Guy and the Best New Artist Grammy.

Billie Eilish's other hit albums and singles include Everything I Wanted, Wish You Were Gay, Don't Smile At Me, Ocean Eyes, My Strange Addiction, Belly Ache and Bury A Friend among others.