If Dhanush Woke Up As Father-In-Law Rajinikanth One Day, He Would...

Dhanush awaits the release of his film Atrangi Re 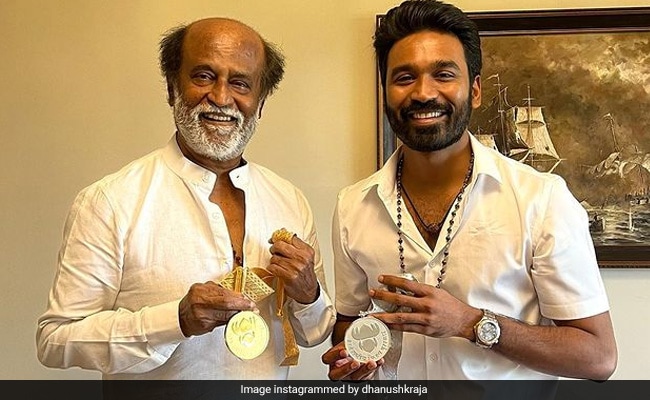 Dhanush is busy promoting his upcoming film Atrangi Re with Sara Ali Khan and Akshay Kumar. His next stop was Karan Johar's talk show Koffee Shots With Karan, which airs on Disney+Hotstar, the same platform where Atrangi Re is slated to release. During the chat, Karan Johar asked Dhanush if he was excited to be a part of the talk show. He replied: "I'm very excited. I speak very less. I'm very shy. So, I don't know how much I can add to your show. But I'm looking forward to having some fun." The National Award winning actor was also asked what would he do if he woke up one morning as his father-in-law Rajinikanth. Dhanush's reply: "Stay as Rajini sir." The actor is married to Rajinikanth's daughter and filmmaker Aishwarya.

Check out the clip from the chat here:

At the 67th National Film Awards, Rajinikanth received the Dadasaheb Phalke Award - India's highest film honour - for his stupendous contribution to Indian cinema, while his son-in-law and actor-filmmaker Dhanush won the Best Actor Award for his performance in Asuran. He shared the award with Manoj Bajpayee, who won it for Bhonsle.

After receiving the award, Dhanush shared a photo of himself with his father-in-law and he wrote: "To win a National Award for best actor on the same stage where my Thalaivar was winning the prestigious Dada Saheb Phalke award was just indescribable." He added, "Thank you to the National award jury for bestowing me with this honour. Also thank you to the press and media for your constant support."

Rajinikanth was last seen in Annaatthe, which released on Diwali this year. Besides Rajinikanth, the film featured Nayanthara and Keerthy Suresh. The film had been directed by Siva. The film clashed with Rohit Shetty's action cop drama Sooryavanshi, starring Akshay Kumar, Katrina Kaif, at the box office.