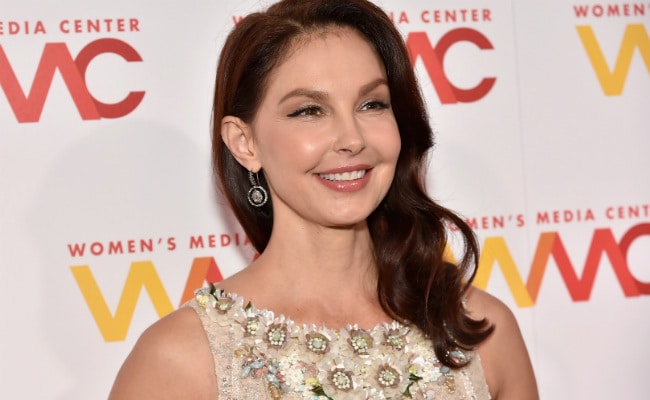 Judd broke the dam on the Weinstein allegations (courtesy AFP)

Ashley Judd was tearful but self-assured in her first interview since publicly accusing Harvey Weinstein of sexual harassment. Wearing a bracelet that read "unstoppable," she talked to Diane Sawyer, and excerpts from the interview aired during Good Morning America Thursday.

"I didn't expect that I would feel tearful, but it's been an absolutely, tremendously moving 2 1/2 or three weeks," Judd told Sawyer. Before the story ran, the actress wasn't sure anyone would believe her or care. Instead, more than 60 women have come forward with similar claims against Weinstein that paint him as a sexual predator who used business meetings as an excuse to lure women to his hotel room, where he would often disrobe and try to cajole them into massages or force them into sexual acts.

Judd broke the dam on the Weinstein allegations. When the New York Times dropped its shocker of an article on Oct. 5 about the industry titan paying off accusers for decades, her account led the story; she was the highest-profile star at that point to come forward. After her claims - not to mention the even more troubling allegations from other women in the New Yorker story the following week - more A-listers, including Gwyneth Paltrow and Angelina Jolie, emerged with their own accusations against Weinstein.

During an interview for that initial Times story, Judd said, "Women have been talking about Harvey amongst ourselves for a long time, and it's simply beyond time to have the conversation publicly."

Coming forward wasn't a decision Judd made lightly. She did so during a run, she told Sawyer, which is when she tends to get clarity. Then she went home and told her parents. According to Judd, her mother, country music star Naomi Judd, said, "Go get him."

Judd reminisced about the day that Weinstein allegedly tried to bully her to bend to his will two decades ago. Still fairly new in Hollywood, she went to his hotel, where she believed she would be meeting him on the patio to talk shop. Instead, the concierge informed her the producer was waiting for her in his room. She hadn't heard any negative rumors about Weinstein at that point, but alarm bells went off. She went upstairs anyway, though, because, "I had a business appointment."

Once inside the hotel room, Weinstein started pressuring her, she said, first asking to give her a massage, then trying to get her to give him one.

She also claimed that Weinstein steered her into a hallway near a closet, where he tried to get her to help him pick out his suit for the day. Then he suggested they go into the bathroom, just ahead of them, so she could watch him shower.

She finally got out of the room by making a deal, according to her account, saying that she would relent when she won an Oscar in one of his movies.

She's been over that day in her mind many times since, wondering if she did the right thing.

"Am I proud of that?" she said. "I'm of two minds - the part that shames myself says, 'No.' The part of me that understands the way shame works says, 'That was absolutely brilliant. Good job, kid. You got out of there. Well done.'"

She told her parents about what had happened to her, not to mention Hollywood agents and actors. But, as with other similar alleged incidents, there were no repercussions for Weinstein. If Judd had come forward back then, she questions whether anyone would have believed her.

Sawyer also showed Judd a photo from the 1997 Vanity Fair Oscar party, which Weinstein released after the New York Times story dropped. It shows a smiling young Judd standing beside Weinstein. The implication from Weinstein's camp was that this was evidence Judd and the producer were close friends.

"Ick!" Judd said upon seeing the picture. Of another photo from the same event, in which Weinstein is clutching Judd's hand, the actress said: "The look on my face is abject terror ... I feel for that 28- or 29-year-old woman."

Judd also alleged that in 1999, Weinstein reminded her of their "agreement." He told her he had the script that would win her that Oscar. By then, though, "I had come into my own, I had come into my power, I had found my voice," she said. "And I was coming right at him, Diane."

Weinstein could sense it, she said, so he told her he would let her out of the deal.

Judd went on to star in two movies with his studio, but she doesn't remember him being on set.

Sawyer asked Judd what she would say if the two were to meet now. She'll never forgive what he did to so many, she said, and she believes he belongs in jail if he did, in fact, rape women. But she had a surprisingly forgiving message.

"What I would say to Harvey is, 'I love you and I understand that you are sick and suffering, and there is help for a guy like you, too, and it's entirely up to you to get that help,' " she said.

When Sawyer expressed shock at Judd's response, the actress said, "That's just who I am. Frankly it's just an easier way to roll through the world than the alternative."

Judd is hopeful that this story will finally change abuses of power in Hollywood and beyond.