"I Had To End This Marriage:" Nawazuddin Siddiqui's Wife Aaliya On Sending Divorce Notice

"I won't be able to speak on the issues right away, but yes, we have been having problems from the last ten years," said Nawazuddin's wife Aaliya Siddiqui 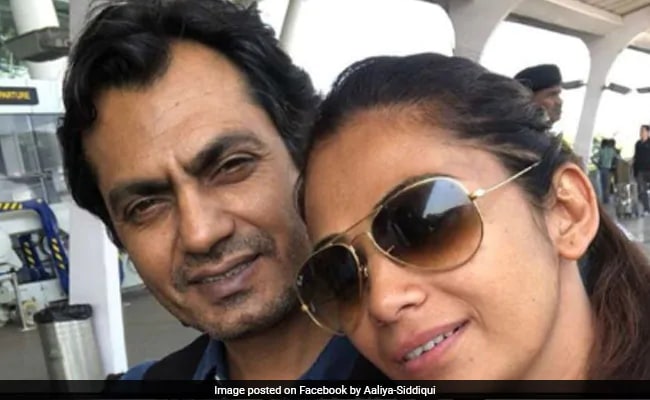 A file photo of Nawazuddin with Aaliya. (courtesy Aaliya Siddiqui)

Nawazuddin Siddiqui, whose birthday it is today, suddenly finds himself the subject of unexpected headlines. The actor, 46 today, has been sent a divorce notice by his wife of 11 years, Aaliya, who revealed in an interview to Indian Express a day ago that the couple had been troubled for the last decade - that's pretty much their entire married life - and that she used the lockdown as an opportunity to end the marriage. News agency PTI confirmed yesterday that Aaliya Siddiqui had sent her husband a notice via WhatsApp and email this month. Nawazuddin Siddiqui is currently in his hometown of Budhana in Uttar Pradesh - he reached last Saturday after receiving permission to travel in the lockdown, and is now on the mandatory two-week home quarantine.

Speaking to Indian Express, Aaliya Siddiqui said, "I have sent him a legal notice, but he has not replied." During the interview, Ms Siddiqui revealed that the couple has been having problems for the last ten years. When she was asked about what compelled her to take the decision to divorce, she said "I won't be able to speak on the issues right away, but yes, we have been having problems from the last ten years." She added that the lockdown gave her time to introspect, saying, "Now, during the lockdown, I got thinking and thought I had to end this marriage. I had sent him the notice much before he left for Muzaffarnagar, and he has not yet replied to my notice, so I have to take a legal route now."

Abhay Sahai, Aaliya Siddiqui's lawyer, told news agency PTI that a legal notice was sent to Nawazuddin Siddiqui on May 7 through email and WhatsApp because of the unavailability of speed post amid the coronavirus pandemic. "Mrs Siddiqui, our client, has also sent the notice through WhatsApp. However, Mr Siddiqui has not responded till date. The notice has been sent claiming maintenance and divorce," Abhay Sahai told PTI on Monday.

Nawazuddin Siddiqui and Aaliya got married in the year 2009 and are parents to a daughter named Shora and son Yaani Siddiqui. It is the second marriage for the Sacred Games star.

Nawazuddin Siddiqui travelled from Mumbai to his hometown Budhana, in the Muzaffarnagar district of Uttar Pradesh, on Saturday after being granted permission from authorities in Maharashtra. The actor will be spending Eid with his extended family although it will be a muted occasion for them - Mr Siddiqui's young sister died some months ago and his mother has been struggled with anxiety since. The Raees actor shared a tweet, in which he explained that he followed proper government approved procedures for his travel. He also revealed why he decided to travel amid the lockdown: "Due to the recent loss of my younger sister, my mother who is 71-years-old, got anxiety attack twice. We have followed all the guidelines given by the State Government. We are home quarantined at our hometown Budhana. Please stay home, stay safe."

On the professional front, Nawazuddin Siddiqui awaits the release of Ghoomketu, which will have a digital release on OTT platform ZEE 5 on May 22. The actor's last theatrical release was Motichoor Chaknachoor, co-starring Athiya Shetty.