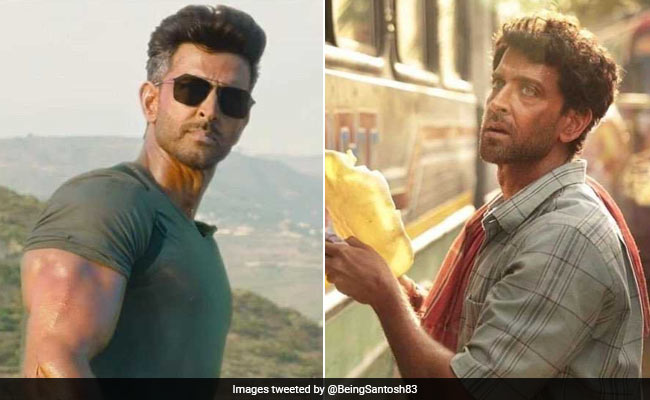 Hrithik Roshan seems to be his own best competition, at least when it comes to giving the wasteland that is social media life. The 45-year-old actor appears in last Friday's release Super 30 as educationist Anand Kumar and in the newly-released teaser of upcoming film War in full beast mode. Much has been said about Hrithik's artificially darkened skin in Super 30, none of it good; it does, however, present enough of a contrast to his action hero self in War to thrill Twitter's meme-loving heart. War co-stars Tiger Shroff and the teaser's fight and chase sequences are quite spectacular; but speaking purely in terms of Twitter humour, Hrithik Roshan wins.

Many of the memes circulating online riff on the unsophisticated Hrithik of Super 30 vs the slick Hrithik of War theme as applied to social and economic situations. Like corporates and pay day:

Me in Boys Hostel vs Me outside Girls Hostel #WAR#WarTeaser#Super30pic.twitter.com/WOhbO6PU2U

The real and virtual worlds:

What he actually is
Vs
What she thinks of him #WarTeaserpic.twitter.com/krw5zN32c7

Pic 1 : India in other Matches

And Hrithik himself, before and after in Koi Mil Gaya:

The teaser of War released to instant acclaim yesterday, not just meme-making. The action promises to be blockbuster, for those who like that sort of thing. Especially attention-grabbing is the face-off between Hrithik and the younger Tiger Shroff, both of whom excel in the genre, albeit 15-odd years apart. A hilarious Twitter exchange between the two actors set this screen rivalry in motion: "Let me show you how it's done," Tiger tweeted to Hrithik; "Take a seat," he responded.

.@iHrithik, your moves may be a little rusty, let me show you how it's done!https://t.co/tGimxHSCwg#WarTeaser#HrithikvsTiger@yrf@vaaniofficial#SiddharthAnand

You're just starting out in a world I've mastered, @iTIGERSHROFF. Take a seat! Presenting#WarTeaserhttps://t.co/scFHJmnCl3

Watch the teaser of War here: