"And that's our victory dance to an amazing sched wrap," wrote Tiger Shroff 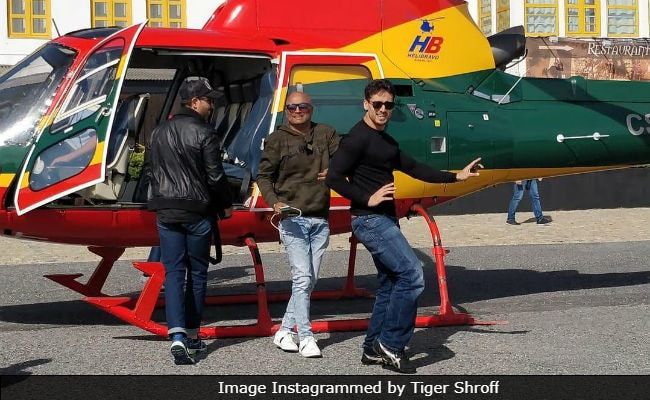 Hrithik Roshan and Tiger Shroff have wrapped the schedule of Siddharth Anand's untitled film recently. The duo posed for a photo. On Tuesday, Tiger treated his Instafam to an epic picture, in which the Baaghi actor can be seen recreating the signature step of Hrithik Roshan's iconic song Ek Pal Ka Jeena from the 2000 film Kaho Naa... Pyaar Hai (which was also Hrithik's debut film) Tiger captioned the post in the most hilarious way and wrote: "And that's our victory dance to an amazing sched wrap!' Tiger added, "Hrithik Roshan: Yo! Let me put my bag away and show you how its done."

Anddd thats our victory dance to an amazing sched wrap! @hrithikroshan : yo! Let me put my bag away and show you how its done @yrf @itssiddharthanand #hrithikvstiger

Meanwhile, film's director shared a picture of the entire team on his Instagram account. In a separate post, Siddharth Anand thanked the crew and wrote: "It's a wrap! Big shout out to the wonderful crew that travelled through various cities, countries, climates and extreme weathers! Making it back home just in time for Diwali! Look forward to the next banging schedule now!"

Siddharth Anand's untitled project is reportedly a remake of Sylvestor Stallone's popular Rambo series, in which Tiger Shroff will be seen playing the titular role while details about Hrithik's character have been kept under wraps. The film will also features Befikre actress Vaani Kapoor and it is being produced by Yash Raj Films. The film is slated to release on January 25, next year.

The film will extensively be shot in several countries including Spain, Georgia, Italy, Portugal and Sweden and India. In an interview with news agency PTI, a few months ago, Siddharth said, "We want to stand apart and redefine how action films are made in Bollywood. We are shooting in Spain, Georgia, Italy, Portugal and Sweden and of course India. Some of the biggest action sequences will be shot in these countries."