Kriti Sanon and Nupur Sanon are holidaying at an undisclosed location 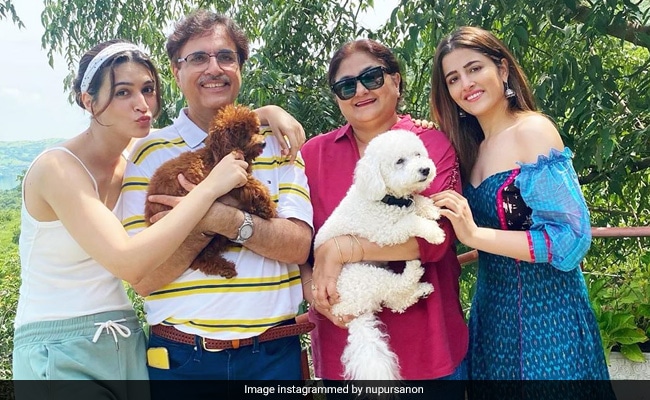 Kriti and Nupur with their family (courtesy nupursanon)

The Sanon sisters Kriti and Nupur, who are on a family getaway, are having the time of their lives, glimpses of which are making it to Instagram. This time, the responsibility of filling up the vacation album has been taken up by Nupur, who is generously sharing photos on her feed. On Wednesday, two stunning family photos made it to Instagram, which Nupur captioned with this message for her family: "If I know what 'love' is... it's because of them." In the photos, Kriti, Nupur and their parents, were also joined by their adorable furry friends for a complete family photoshoot. "In sickness and in health," Nupur Sanon added to her caption. Here, take a look.

If I know what 'love' is...it's because of them.♥️ #InSicknessAndInHealth🤝

Meanwhile for Nupur, her sister Kriti Sanon is "the best person in the world." And these adorable selfies are proof of that.

Earlier, Nupur Sanon made a splash on Instagram with a bunch of pool photos, which she captioned as "Fish... or may be I'm a mermaid who lives far from the sea."

Kriti Sanon was last seen in the period film Panipat, in which she co-starred with Arjun Kapoor. Kriti Sanon is best known for her roles in films such as as Dilwale, Raabta, Bareilly Ki Barfi, Luka Chuppi, Arjun Patiala and Housefull 4. Kriti will next be seen in Laxman Utekar's Mimi, which is a remake of the National Award-winning 2011 Marathi film Mala Aai Vhhaychy!. Kriti will play the role of a surrogate mother in the film.

Nupur Sanon has featured in a music video titled Filhall alongside actor Akshay Kumar, and they have also promised a second part of the song.