How Rishi Kapoor Liked To Party With Friends, In A Few Pics By Ekta Kapoor

What Ekta wrote in the caption, will break your heart: "They will never party again like this! Goodbye uncle and actor par excellence." 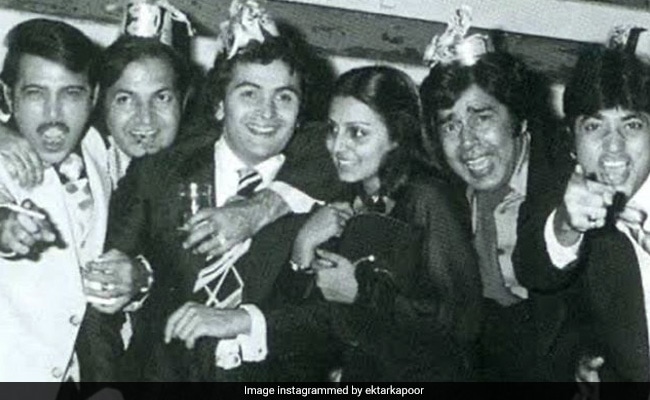 We can always turn to Rishi Kapoor, Jeetendra and Rakesh Roshan for BFF goals, something that Ekta Kapoor reminded us the day Mr Kapoor died. Ekta, daughter of Jeetendra, shared a priceless throwback photo of on Instagram, in which Rishi and Neetu Kapoor can be seen partying with Rakesh Roshan, Jeetendra, Prem Chopra and Sujit Kumar. Neetu and Rishi Kapoor got married in 1980 after starring in a few films together. What Ekta wrote in the caption, will break your heart: "They will never party again like this! Goodbye uncle and actor par excellence." The subsequent pictures in Ekta's post are proof that Rishi Kapoor, Jeetendra and Rakesh Roshan continued to remain friends over the years - they are from Jeetendra's 75th birthday party held in Jaipur in 2017.

In his career, Rishi Kapoor worked with both Jeetendra and Rakesh Roshan. After his homecoming last year, Mr Kapoor got a grand welcome from the two of his closest friends. He had tweeted a photo from the party last year to say: "Thank you for the warm welcome." Mr Kapoor was in New York for cancer treatment for almost a year.

The actors had a reunion of sorts ahead of that as well, on Jeetendra's 75th birthday party. Both Ekta and Rishi had shared photos from the night to remember. "To friendships that last," wrote Ekta while Rishi Kapoor wrote: "Jeetendra - the original superstar's 75th Birthday, celebrating now Hotel Fairmont, Jaipur. Wish him loads of love, health and happiness."

Rishi Kapoor died Thursday morning, with his funeral attended by family members, Abhishek Bachchan, Alia Bhatt and Anil Ambani. "He was grateful for the love of his fans that poured in from the world over. In his passing, they would all understand that he would like to be remembered with a smile and not with tears," read a family statement.