How Nayanthara Celebrated Her 37th Birthday With Vignesh Shivan

In the trending videos, Nayanthara looks pretty in a yellow top and blue jeans 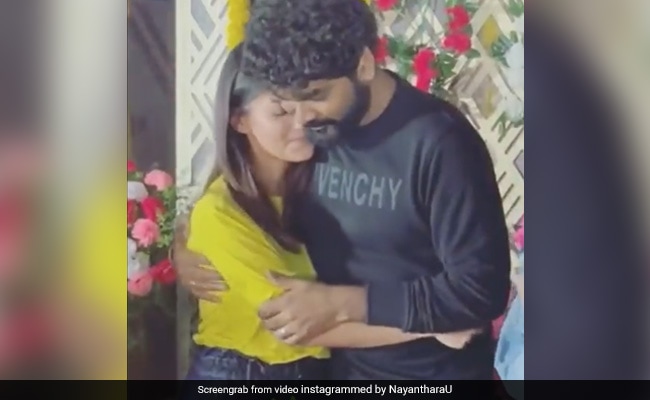 Happy birthday, Nayanthara. The actress turned 37 on Thursday. This year too, Nayanthara celebrated her birthday with her fiance and filmmaker Vignesh Shivan. Pictures and videos from her birthday celebrations have been doing rounds on the Internet. In the trending videos, Nayanthara looks pretty in a yellow top and blue jeans as she cuts her birthday cake, Vignesh can be seen hugging her and wishing her in the clip. He can be seen dressed in a black t-shirt and jeans. Another video shows glimpses of Nayanthara's birthday cakes.

Nayanthara and Vignesh Shivan fell in love while working together for the 2015 film Naanum Rowdydhaan.

On Nayanthara's birthday, Vignesh shared her new look poster from his upcoming film Kaathuvaakula Rendu Kaadhal. He wrote: "Happy birthday Kanmani, thangameyy and my ellamaeyyyy. Life with you is full of love and affection to perfection. May God bless you to remain as beautiful as you are forever!"

Vignesh Shivan and Nayanthara have been together for the past few years. While promoting her last film Netrikann on a television show earlier this year, Nayanthara talked about her engagement ring. When she was asked about the ring, the actress said in Tamil: "This is an engagement ring."

Nayanthara was last seen alongside Rajinikanth in Annaatthe and before that in Netrikann, a remake of Korean film Blind. It was directed by Milind Rau. The actress also has Atlee, Godfather and Gold lined up.

Samantha Ruth Prabhu's Birthday Wish For "Queen" Nayanthara Is Everything