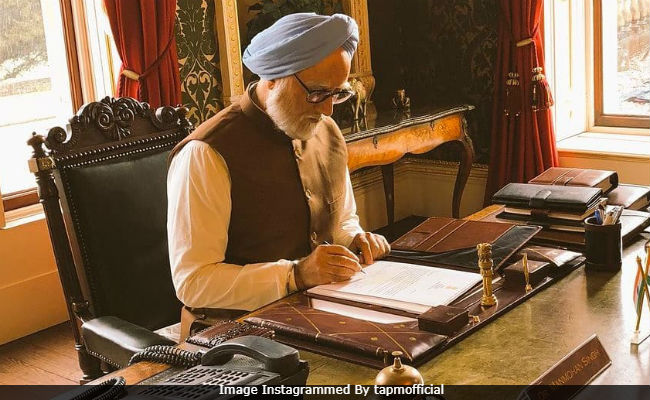 In a time lapse video shared on social media, actor Anupam Kher, who plays Dr Manmohan Singh in The Accidental Prime Minister, shared how he transformed into the character of the former prime minister. The 20-second video gives a sneak peek of his look - from the beard, turban to the outfit. "Making of Dr Manmohan Singh," Anupam Kher wrote. The entire process used to take two hours on each day of the shoot. In the same post, the 63-year-old actor expressed his gratitude to the team who worked for him. "Thank you. I couldn't have done this without you," Anupam Kher added.

Making of #DrManmohanSingh: This is a 20sec time lapse video of a two hour job done by my great make and wardrobe team. Thank you dearest Abhilasha for your brilliant costume design, #SurindrasNaturalHairTeam Bala, Pranay, Deepak, Rishi, Mangesh and Jaspreet. I couldn't have done this role without you. #TheAccidentalPrimeMinister #SwipeLeft @tapmofficial

When the first look of The Accidental Prime Minister was released, the Internet was mighty impressed with Anupam Kher's striking resemblance to Manmohan Singh.

The Accidental Prime Minister is based on the book of the same name by Sanjay Baru, who served as Manmohan Singh's media advisor. Mr Baru's role is played by Akshaye Khanna.

The film has been dodged by controversies after the trailer was released a couple of weeks ago. Watch The Accidental Prime Minister's trailer here.

Of the film, producer Sunil Bohra said, "In my opinion, the film is certainly going to be a game changer as far as political cinema is concerned. It took two years to write, about half a year to make, but shall be remembered for a long, long time as it is the first film where all the characters are addressed real names," reports IANS.

Directed by Vijay Ratnakar Gutte, The Accidental Prime Minister is slated to hit the screens on January 11.