"I never feel nervous in doing any role. I only see the camera and my role and nothing else," said Gulabo Sitabo actor Farrukh Jafar 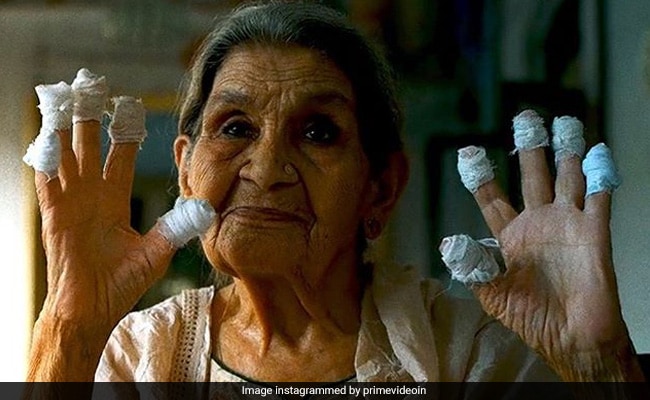 Farrukh Jafar in a still from Gulabo Sitabo (courtesy primevideoin)

At 88, actor Farrukh Jafar, whose scene-stealing turn as Fatto Begum in Gulabo Sitabo is the highlight of the movie, has retained her childlike enthusiasm and love for camera, which she considers as the secret behind her acting. "I never feel nervous in doing any role. I only see the camera and my role and nothing else. That's my secret," the actor told PTI over phone from Lucknow.

Jafar plays the 95-year-old wife to Amitabh Bachchan's 78-year-old Mirza who is awaiting his Begum's death to finally own Fatima Mahal, the derelict mansion at the centre of the conflict in the movie streaming on Amazon Prime Video.

Begum, with her quick repartee and a fondness for Pandit Jawaharlal Nehru, keeps a tight control over Mirza and is responsible for the film's surprise twist in the final moments.

Jafar said director Shoojit Sircar and writer Juhi Chaturvedi came to her home in Lucknow to offer her the part.

"I am a big Amitabh Bachchan fan. I was like 'Wah! I will get to work with a superstar. I had his romantic image as the star of Silsila, a tall and handsome guy but in this film his get-up was ugly. He was playing Mirza with a fat nose and big beard," she said.

"Shoojit told me 'Please forget that he is Amitabh Bachchan. He is the greedy, old Mirza and you are his wife, Fatto Begum''. I immediately understood what he meant."

The actor said she had hoped to talk to Bachchan on the sets but the actor would disappear after doing his scenes.

One of the first radio announcers of Vividh Bharti Lucknow in 1963, Jafar made her acting debut with 1981 movie Umrao Jaan where she played Rekha''s mother.

After her debut, roles in TV shows beckoned but it was Shah Rukh Khan-starrer 2004 film Swades that gave her a memorable second innings in Bollywood. In 2010, she starred in Peepli Live where her expletive-laden rants as the bidi-smoking mother-in-law made her an instant hit. She followed it up with roles in Salman Khan-starrer Sultan, Aamir Khan-starrer Secret Superstar and Peepli Live co-star Nawazuddin Siddiqui's Photograph.

The actor credits radio for giving her a career as a performer. "I had a relative who needed a job. I told her I cannot do much but I know someone in the radio so I will take you there. We went there and 'mujhe vahan ka mahaul bahut achha laga' (I really liked the atmosphere there). I asked them whether I could also read the script. They said I could. I started reading and later got to know that I had been selected," she recalled.

The actor is happy that her performance is being appreciated. "Maine suna ki Begum baazi maar le jaati hai picture mein. (I have heard that Begum outruns everyone in the film). Such praise about my character makes me happy," she added.

Jafar, who was married to journalist-politician Syed Muhammad Jaffar and has two daughters -- Mehru and Shaheen, said her bond with camera always pulls her towards cinema.

"I will keep acting if I get good offers. When the camera is on, I forget everything," she said adding that some of her projects are currently stuck due to the coronavirus situation.