Hina Khan, Who Lost Her Father, Takes A Break From Social Media: "Me And My Family Are Mourning"

"I am grateful to each one of you for checking in on me and my family during these tough times," Hina Khan wrote in her post 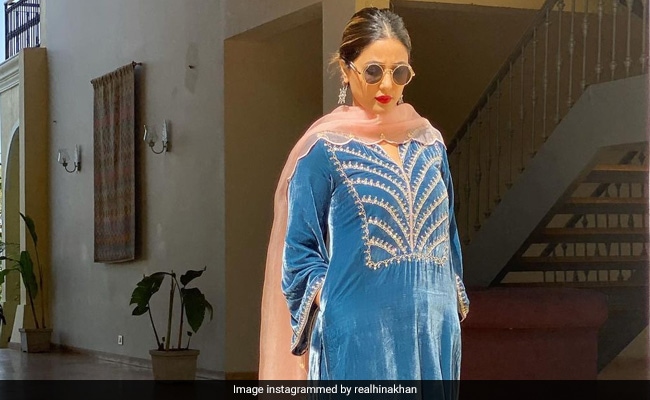 Actress Hina Khan, who lost her father recently, has shared in an Instagram note that she's taking a break from social media. On the professional front, her accounts will be handled by her team, she said. In an Instagram story posted late on Saturday night, Hina Khan said she's in mourning and also added a message of gratitude for those who reached out to her for support. "My beloved father Aslam Khan left for heavenly abode on April 20. I am grateful to each one of you for checking in on me and my family during these tough times. While me and my family are mourning the loss, my social media accounts will be handled by my team for upcoming work commitments. Thank you for your support and love."

Here's what Hina Khan shared in an Instagram story. 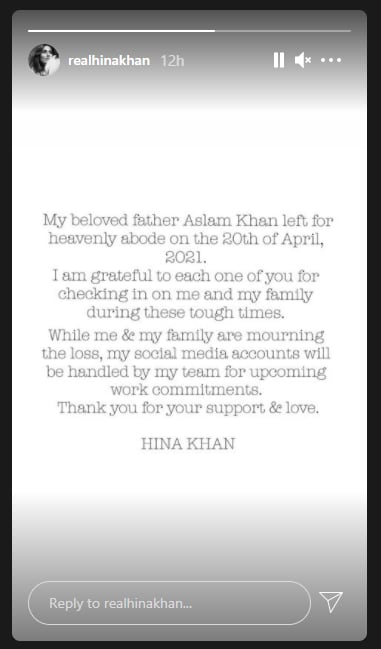 Hina Khan was in her hometown Srinagar when she received the news of her father's death. He reportedly died of cardiac arrest. On Tuesday night, Hina Khan flew back to Mumbai in time and was photographed at the airport along with her family members. Hina's close friends from the industry Kanchi Singh, Eijaz Khan, Hiten Tejwani, among others paid tribute to her father on social media.

On the professional front, Hina Khan was part of Bigg Boss 14 this year, which was entered as a "Senior". She shot to fame with her role as Akshara in the popular television show Yeh Rishta Kya Kehlata Hai. She was also a part of the renewed version of Kasautii Zindagii Kay 2, in which she played the antagonist Komolika. Hina Khan was also seen in a brief appearance in the TV show Naagin 5, in which she starred as the titular shape shifting serpent.

She also participated in television reality shows like Khatron Ke Khiladi season 8 and Bigg Boss 11. Hina Khan last starred in the web-series Damaged 2 and was last seen in Wish List, which she also produced.

Behind This "Well-Dressed Baby Is"... Mom Anita Hassanandani. Watch Her Video