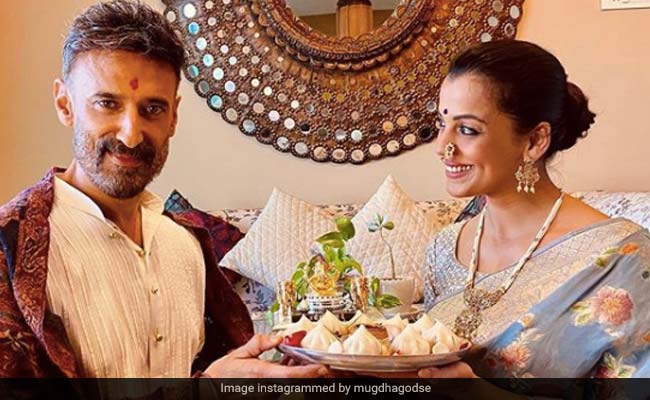 Model-actress Mugdha Godse shared a few glimpses of her Ganesh Chaturthi celebrations with boyfriend Rahul Dev and they are fabulous. In one of the photos, Mugdha and Rahul feature in a priceless moment and her smile says it all. Actor Rahul Dev and Mugdha Godse, who celebrated their seven years of togetherness last month, were every bit gorgeous in traditional attires for the Ganesh Chaturthi celebrations. Mugdha was stunning in a benarasi saree paired with traditional jewellery while Rahul Dev styled his kurta look with a shawl. Sharing the photos, Mugdha wrote: "Seeking lord's blessings... Festive mode... Modak time... Morya Morya."

On their seven-year anniversary, Mugdha dedicated this post to boyfriend Rahul Dev: "7 years it is. Happy anniversary, Rahul Dev." Mugdha revealed that she met Rahul for the first time at a friend's wedding in Jaipur, which marked the beginning of their love story.

7 years it is... Happy anniversary ❤️❤️❤️ @rahuldevofficial special mention to @anchalkumar24 @agmittal whose wedding we met, in jaipur!!! I guess shaadi.com effect was working during their wedding too!!! ❤️???? #love #life #fun #blessings

In the recent past, Mugdha Godse frequently filled up her Instagram with pages from her lockdown diaries, mostly featuring Rahul Dev. On Mugdha Godse's birthday, Rahul Dev decided to photobomb her shoot and shared the result on Instagram: "Birthdays are special. Mugdha turns a year younger... photo bombed her shoot."

Mugdha Godse stepped into Bollywood with her debut film Fashion. Her resume as an actress also includes films such as Gali Gali Chor Hai, Will You Marry Me?, Bezubaan Ishq and Heroine. In 2015, Mugdha Godse and Rahul Dev participated in the reality show Power Couple. Rahul Dev has starred in films such as Asoka, Indian, Omkara, Fight Club - Members Only, Dishoom, Pagalpanti and was last seen in Operation Parindey.