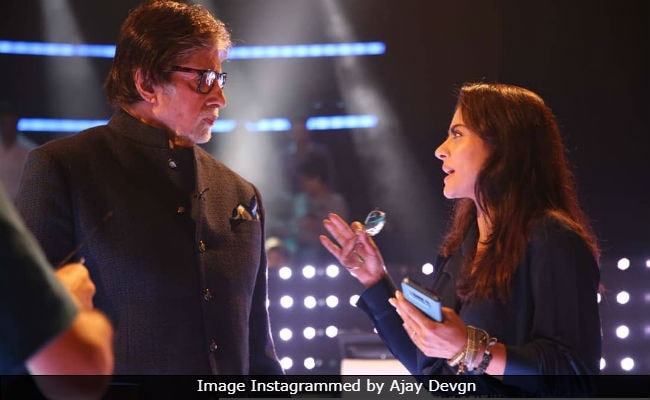 Amitabh Bachchan is all set to make a cameo appearance in Kajol's upcoming film Helicopter Eela. According to reports, Mr Bachchan will be seen playing himself in the movie and Ajay Devgn's latest Instagram post totally corroborates the reports. On Tuesday, Ajay Devgn shared a picture featuring Mr Bachchan and Kajol and thanked the 75-year-old actor. He wrote: "Thank you so much Amit ji for saying yes without batting an eye. Both Helicopter Eela and me thank you." Mr Bachchan and Kajol will be seen sharing screen space after 17 years. The duo co-starred in Karan Johar's 2001 film Kabhi Khushi Kabhie Gham.

Thank you so much Amitji for saying yes without batting an eye. Both #HelicopterEela and me thank you.

As mentioned in the film's posters and trailer, Helicopter Eela is all about "reinventing parenting techniques." Kajol, who headlines the cast of Helicopter Eela, will be seen playing the role of a single mother. The film also stars 19-year-old National Award winning actor Riddhi Sen. The trailer of the film released earlier this month and it has over 10 million views on YouTube.

Helicopter Eela has been directed by Pradeep Sarkar, who has earlier directed films such as Mardaaniand Parineeta. The film has collaboratively been produced by Ajay Devgn and Jayantilal Gada and it will hit the screens on September 7.