Rhea Chakraborty's one-word caption about "healing" seem to have struck a chord with her followers, who flooded her feed with heart-warming comments 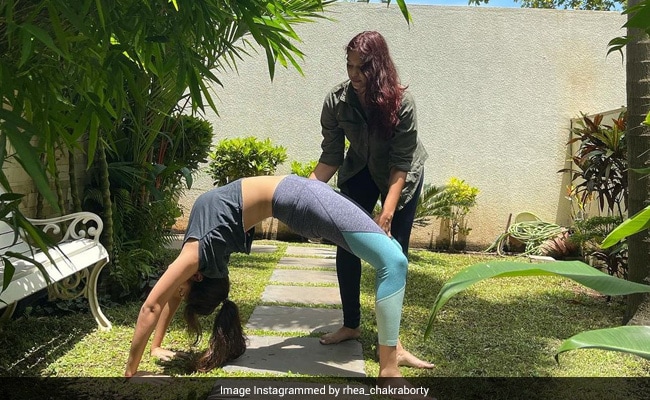 Actress Rhea Chakraborty, who has actively returned to social media again, shared a glimpse of her yoga diaries on Instagram. On Tuesday, Rhea Chakraborty revealed that her chosen way of "healing" is practicing yoga, Sharing a photo of herself doing Chakrasana, Rhea Chakraborty wrote: "Healing" and hashtagged the photo with "yoga for life." Rhea also gave a shout out to her best friend, yoga instructor Samiksha Shetty, for being her trainer: "I'm lucky to have my best friend as my Yoga Guru." Rhea Chakraborty's one-word caption about "healing" seem to have struck a chord with her followers, who flooded her feed with heart-warming comments and good dose of positivity.

Here's how Rhea Chakraborty is "healing":

Last year, Rhea Chakraborty had a difficult few months after the death of actor Sushant Singh Rajput, who she was dating. The actor was found dead at his Mumbai residence on June 14 - his death is being investigated by the Central Bureau of Investigation or CBI, who questioned Rhea and her family members as well as some of Sushant's staff. During the ongoing investigation last year, Rhea and her brother Showik were arrested by the Narcotics Control Bureau or NCB in a separate drugs probe - both are currently out on bail.

On Sushant's first death anniversary, Rhea Chakraborty dedicated an emotional post to the late actor and wrote: "There isn't a moment where I believe that you aren't here anymore. They said that time heals everything but you were my time and my everything. I know that you are my guardian angel now -watching me with your telescope from the moon and protecting me."

Rhea Chakraborty was last seen in 2018 movie Jalebi. She will next feature in upcoming thriller Chehre, starring Amitabh Bachchan and Emraan Hashmi.