On Kareena Kapoor's Birthday, 10 Songs Of The Actress That Will Get You Grooving

Thanks to her versatile body of work, Kareena Kapoor has several hit songs to her credit. 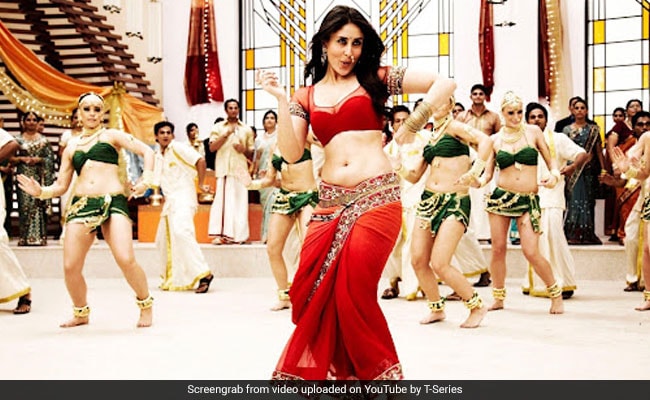 Kareena Kapoor in a still from Chammak Challo.(Image courtesy: YouTube)

Happy birthday, Kareena Kapoor Khan. The actress, who turns 41 today, is a superstar in every sense of the term. She has ruled the Hindi film industry for over 20 years now. Since her debut with Refugee in 2000, Kareena has worked in films that have received both commercial success and critical acclaim. With a diverse portfolio came a bunch of songs that have made Kareena an icon across generations. From love songs to party numbers, no matter what the occasion is, you will find a Kareena Kapoor song that fits the bill. On her birthday, we have curated a list of 10 such songs that will make you want to get up and groove.

We had to start the list with one of the most defining roles and songs of Kareena Kapoor's career. As Geet from Jab We Met, Kareena delivered one of her most iconic roles and this song was a chartbuster. Perfect for a quick dance routine, this is a favourite across age groups.

Bole Chudiyan is a staple in most sangeet functions and so are Kareena Kapoor's steps from the song. Though the song features the entire ensemble cast, the opening shot of the video with Kareena Kapoor's entry in a traditional avatar -- a stark detour from Poo's usual wardrobe choice -- remains the most recalled moment of the song.

Another gem from the Kabhi Khushi Kabhie Gham album, this song is loved as much for its tune as it is for Hrithik Roshan and Kareena Kapoor's electrifying chemistry. Shaking a leg in an uptown discotheque in leather pants, the duo looked at ease pulling off complex moves, giving us dancing goals for a lifetime.

This song was the first time we saw Kareena Kapoor in her “size zero” avatar. The song by Vishal- Shekar soon became a hit thanks to Kareena's looks, her moves and her inimitable presence in front of the camera.

In this period drama, Kareena Kapoor proved to the world that she was stunning even without a hint of makeup. And in this song, Kareena let loose, flirting as effortlessly with the waterfall and wind as she does with the camera.

This song needs no introduction. Despite getting criticised for the lyrics, Fevicol Se continues to be a party pick for its beats and Kareena Kapoor's infectious energy in the video.

This number from the Shah Rukh Khan and Kareena Kapoor starrer Ra.One marked singer Akon's Bollywood singing debut. And while people came to see Akon, they stayed for Kareena's dancing skills. The song turned into a huge hit.

Mauja Hi Mauja is a favourite at weddings, parties and even shows in schools and colleges. With Pritam's catchy tune and Shahid Kapoor and Kareena Kapoor's chemistry, this song is a must-have on your dance playlist.

This song is easy to dance to. At least that is what Kareena Kapoor and Aamir Khan made us feel when they grooved to this dreamy number in true Bollywood style.

The film was easy to forget but this song featuring Kareena Kapoor and sung by Alisha Chinai is a fan favourite. Looking ethereal in her fusion look, Kareena had the nation hooked to her signature moves.

Tell us which of these songs of Kareena Kapoor Khan you love the most.