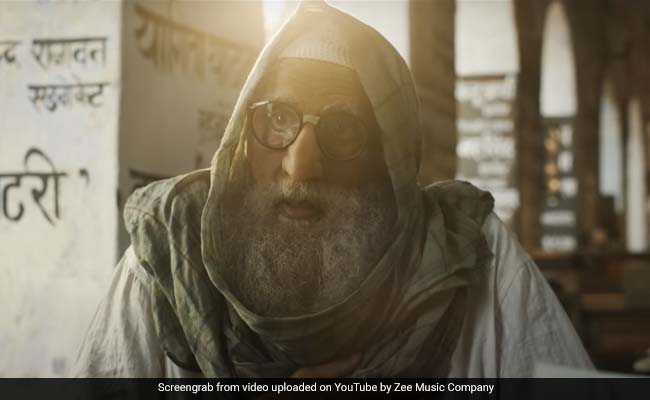 Amitabh Bachchan in a still from the song. (courtesy YouTube )

The second song from Shoojit Sircar's upcoming film Gulabo Sitabo, released on Wednesday afternoon and it is as quirky as the first track Jootam Phenk. The song titled, Madari Ka Bandar, gives us a glimpse of Mirza Sheikh's (Amitabh Bachchan) tonga rides in Lucknow, his beloved dilapidated building Fatima Mahal and his tenant Baankey (Ayushmann Khurrana). The video has an old world charm about it. Going by the video, it will be tough to decipher who the metaphorical "madari ka bandar" is. Seems like we will have to wait for the film to release to get an answer to that, but like Big B stated in his tweet, the song does want us to "groove and move." Madari Ka Bandar has been sung by Tochi Raina and Anuj Garg and the lyrics are by Dinesh Pant.

Check out the song:

While announcing the release of the song, Big B tweeted: "Moving and grooving ... Just feel like getting up and dancing...Samjhe hai apne aapko sikandar, koi inhe batao aakhir hai yeh madari ka bandar."

Directed by Shoojit Sircar, Gulabo Sitabo is slated to release on Amazon Prime on June 12. The film marks Big B's fourth collaboration with the director. Big B's other projects with Shoojit Sircar include Shoebite and Pink. The duo also worked together in the 2015 film Piku, co-starring Deepika Padukone in the titular role and late actor Irrfan Khan. Big B received a National Award the Best Actor for his performance in the film.