Gul Panag's "Throwback To Playing Ajay Devgn" Like A Pro. We Are Impressed

The actress can be seen laughing as she straddles two SUVs in style. 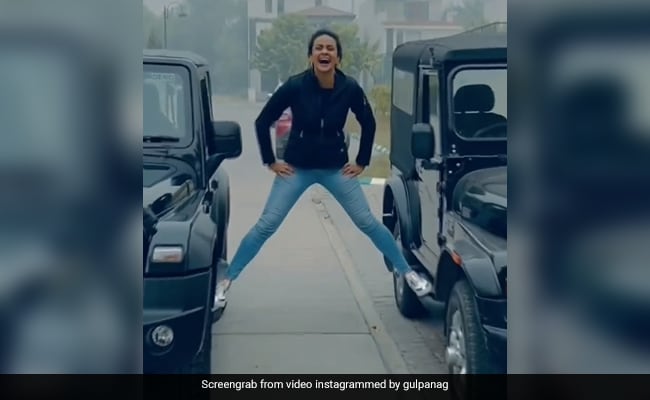 Actress Gul Panag can pull off the most adventurous of activities with the ease of an expert. The stunning star has now shared a throwback video where she is seen recreating a classic Bollywood stunt, leaving us all with a smile on our face. In the Instagram Reels, Gul Panag is “channeling her inner Devgn” by giving the iconic scene from the film Phool Aur Kaante a fun twist. In the movie, debutant Ajay Devgn impressed fans by straddling two moving bikes. And now, Gul Panag is pulling off a similar move, albeit with two stationary sports utility vehicles. In the Reels, the actress says, "Channeling my inner Devgn," before breaking into a smile. She wrote in the caption, "Throwback to playing Ajay Devgn," and tagged the actor. Fans and followers seemed to love the video and flooded the comments section with heart emojis. One follower summed up the general feeling towards the post and wrote, "Amazing. Looks like Ajay Devgn has competition."

The talented actress is much loved for her candid posts on fitness, films and family. She shared an awe-inspiring clip of herself performing a complex asana on the occasion of International Yoga Day.

Also, you cannot miss this video of Gul Panag killing it at the gym. Sharing the clip, she wrote, "Nothing better than some endorphins to elevate the spirits in these terribly depressing times." Well, that sure seems like the motivation we needed to get our workout in place.

In another photo that had our heart, Gul Panag can be seen resting on a bike with her son after a hike on a trail. "Of long walks and bike rides. Finally, to be able to breathe in the outdoors! This isn't a privilege one is likely to take for granted again. Here's hoping the worst of this pandemic is behind us. Hope for the best. Prepare for the worst."

Gul Panag made her debut in Bollywood with the 2003 film Dhoop.  She was last seen in the hit web series Paatal Lok.