"Finally Being Able To Breathe In The Outdoors": Gul Panag Checks In From Hill Station Trip

"This isn't a privilege one is likely to take for granted again," Gul Panag captioned her post 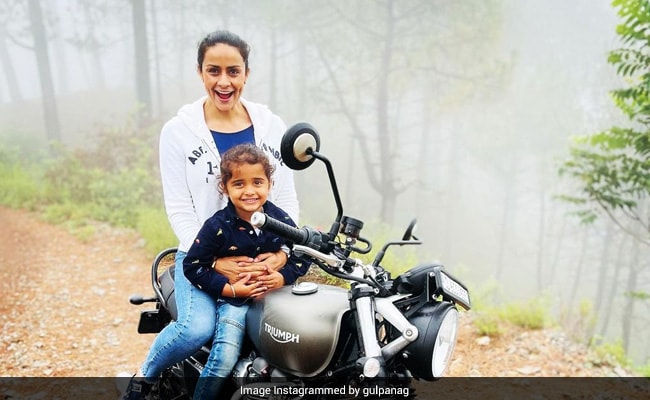 Finally, Gul Panag is travelling again. The 44-year-old actress shared a glimpse of her little outing to the hills on Instagram and wrote about how much she missed being outdoors. When in the hills, Gul Panag followed a walking trail along with her little son Nihal. Sharing a happy travel memory from the hills, Gul Panag wrote: "Of long walks and bike rides. Finally, to able to breathe in the outdoors! This isn't a privilege one is likely to take for granted again. Here's hoping the worst of this pandemic is behind us. Hope for the best. Prepare for the worst."

In a surprising turn of events, Gul Panag was eventually joined by her husband Rishi Attari too - the mysterious "he" in Gul Panag's caption appears to be a reference to her husband. "PS - Nihal and I walked the trail, and he came riding out to surprise us on Sherbir Panag's bike, ffording us this wonderful photo op." Sherbir Panag is the actress' brother.

Apart from being an explorer at heart, Gul Panag is also a fitness enthusiast. She often trends for her work out videos, which also often feature her "running buddy", son Nihal.

Earlier this year, here's what Gul Panag wrote in her post about her body transformation journey: "After early gains in Feb 2021, I hit a another plateau. Nothing was working. No matter how hard I tried. Then I went back to concentrating on the process, and enjoying it. Introduced roller blading to my regimen (not regime, which is another story). I'm feeling better about myself. And that's a great place to be in."

Gul Panag also became a pilot like her husband Rishi Attari in 2016. In terms of work, Gul Panag was last seen in Prime Video web-series Paatal Lok, in which she co-starred with Jaideep Ahlawat. In films, she was last seen in 2019 movie Bypass Road.