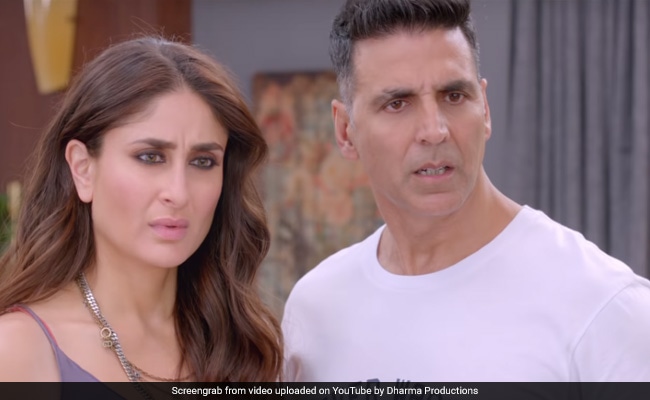 A still from the Good Newwz trailer (courtesy YouTube)

The second trailer of Good Newwz picked up from where it stopped last time. So, Akshay Kumar and Kareena Kapoor play a couple, who are trying to conceive their first child through IVF (In vitro fertilisation). Kiara Advani and Diljit Dosanjh portray the role of a slightly younger couple, who too opt for IVF. Both the couples head to the same hospital, which turns their lives upside down. Owing to their similar surnames - Batras - the hospital authorities mix-up the sperm and now, Kareena Kapoor is pregnant with Diljit Dosanjh's baby and Kiara Advani with Akshay Kumar's. Why do you think Akshay Kumar tweeted this while sharing the trailer: "Delivering a wave of laughter before the fun unleashes! Are you ready to handle the Batras?!"

The trailer begins with Akshay Kumar asking Kareena Kapoor to rethink her decision of having a baby as she clearly appears uncomfortable about the whole sperm mix-up. Then she decides to sign a contract with the other Batra couple about a few rules and regulations. Meanwhile, Diljit and Kiara, who play a happy-go-lucky couple, can't wait their baby to become a rapper like Honey Singh or an athlete like Milkha Singh. As they constantly follow Kareena and ask her to take care of the baby well, she appears to be in a mess and so does her onscreen husband Akshay, who at one point says he wants to punch Diljit.

They call each other "crazy" and "rubbish" in their rollercoaster ride through pregnancy.