The fan has Sunny's name tattooed on his arm, two little hearts bookending the words 'Sunny Leone' written in cursive. 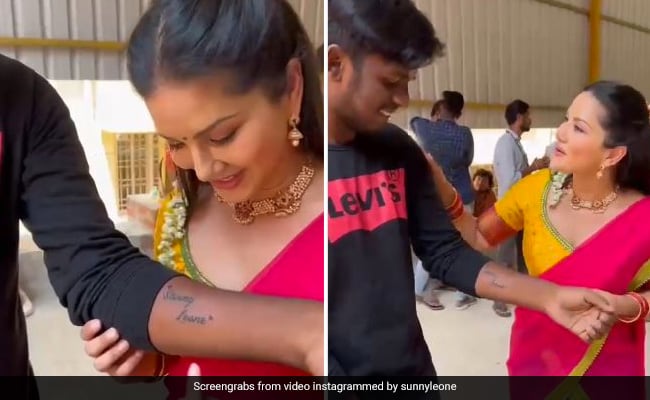 Sunny Leone's fan has her name tattooed on his arm (Images courtesy: sunnyleone)

"Come here, look at this," says actress Sunny Leone in a video she shared on Instagram today. In it, Sunny invites the camera to zoom into the arm of the male fan standing next to her; when it does, we see what's got her so excited – the fan has Sunny's name tattooed on his arm, two little hearts bookending the words 'Sunny Leone' written in cursive. "So amazing, thank you so much," Sunny tells him.  In her caption for the video, Sunny Leone commented hilariously on the permanence of the fan's tribute to her and its likely effect on his personal life. "Hope you love me forever because now you have no choice. Good luck finding a wife," she wrote.

Sunny had a cameo in Akshay Kumar's Singh Is Bliing and has featured in song sequences in Shah Rukh Khan's Raees, Ajay Devgn's Baadshaho and other films including Bhoomi and Motichoor Chaknachoor. Sunny's upcoming films include Rangeela in Malayalam, Veeramadevi and Shero in Tamil, and the Hindi-language Helen.

Sunny Leone is perhaps best-known now as co-host of MTV Splitsvilla – she has been associated with the show since 2014.