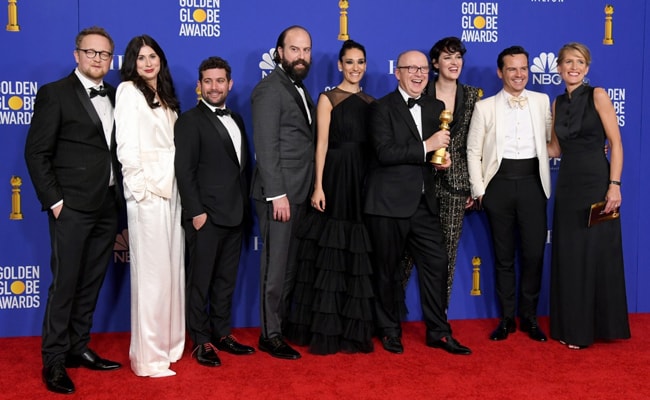 The television awards at the Golden Globes are often somewhat overlooked - after all, the industry handed out the Emmys just a few months ago. But at boozy Globes gala, the winners in the small screen categories - including the stars behind breakout British comedy Fleabag and the darkly humorous drama Succession - got some laughs and got political.

Phoebe Waller-Bridge accepted the trophy for best musical or comedy series for Fleabag - which follows the antics, sex life and tribulations of a dry-witted 30-something woman in London -- with a line of thanks for none other than Barack Obama for putting the show on his Best Of 2019 list.

"Personally, I would like to also thank Obama for putting us on his list - as some of you may know, he's always been on mine," she said, drawing peals of laughter for her reference to a scene in season one in which her character masturbates to the former US president giving a speech.

Waller-Bridge also snagged a Globe for best comedy actress, adding it to her collection of Emmys for the critically acclaimed BBC series, which has grown into a phenomenon in the US after being acquired by Amazon.

HBO's Succession- centered on a powerful media family's wrangling for control of its company - scored the award for best drama series.

It fended off Netflix's flagship The Crown, whose new cast is led by Oscar winner Olivia Colman. She won the night's Globe for best drama actress. Succession star Brian Cox took home the best drama actor prize for his role as the family's husky, growling patriarch.

Chernobyl - about the catastrophic 1986 nuclear accident - went home with the award for or TV movie, and Stellan Skarsgard won for best supporting actor.

Netflix had secured 17 nods in the television categories, where it led the pack, ahead of HBO which had 15. But HBO won four awards to Netflix's one.

Michelle Williams accepted the award for best actress in a limited TV series or movie for her portrayal of Broadway legend Gwen Verdon in Fosse/Verdon. She made a moving call to women to vote "in your own self-interest," emphasizing support for a woman's right to choose.

Australian actor Russell Crowe was not present to accept his Globe for best limited series or TV movie actor for his portrayal of Fox News founder Roger Ailes in The Loudest Voice- but nevertheless urged action on climate change as his home country reels from devastating wildfires.

"Make no mistake, the tragedy unfolding in Australia is climate change-based," he said in a letter read aloud at the gala. We need to act based on science, move our global workforce to renewable energy and respect our planet for the unique and amazing place it is."

Actor and comedian Ramy Youssef won for best musical or comedy actor for his series Ramy, in which he plays a version of himself, navigating life with immigrant parents and reconciling his Muslim faith with secular life.

Patricia Arquette meanwhile won her third Globe for her supporting role in The Act and urged Americans to vote in this year's presidential election in accepting the award.

(This story has not been edited by NDTV staff and is auto-generated from a syndicated feed.)
Comments
Fleabaggolden globes 2020