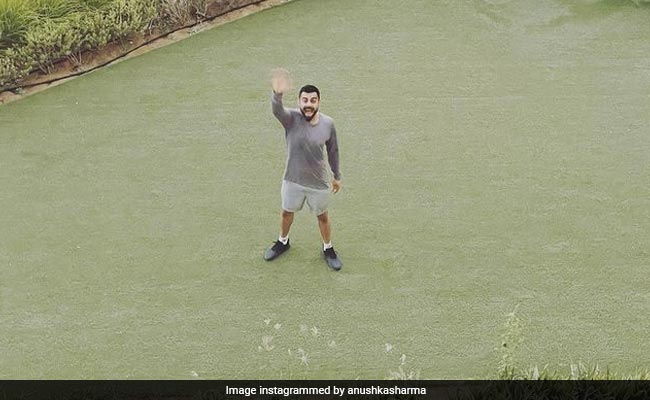 Anushka Sharma and Virat Kohli give us couple goals every now and then. The reason we are saying this is because, on Saturday, the actress shared glimpses of their "love in the time of bubble life." In case you didn't know, Virat Kohli, who is the captain of the Indian cricket team for the T20 World Cup, is staying in a Dubai hotel and Anushka has joined her husband on the tour and is currently quarantining in a separate room. Sharing photos of Virat Kohli waving back at her from the balcony of his room and from the lawn, Anushka Sharma wrote: "Couldn't choose between these two captions - Quarantine makes the heart fonder and Love in the time of bubble life #OhWell, you get the point!"

See what Anushka Sharma posted from Dubai on Saturday:

Anushka Sharma and Virat Kohli got married in an intimate ceremony in Tuscany, Italy in 2017. They welcomed their first child, a baby daughter, on January 11. A couple of days ago, on Ashtami, the actress posted a happy photo of herself playing with little Vamika and wrote: "Making me braver and more courageous every day. May you always find the strength of the goddess in you my little Vamika. Happy Ashtami."

A few weeks after Vamika's birth, Anushka Sharma and Virat Kohli returned to their respective work. The duo were in the UK for a couple of months for Virat Kohli's cricket tours.