Ginny Weds Sunny Review: That it isn't the sort of entertainer that will sweep you off your feet does not undermine its ability to keep you interested in the fate of the two protagonists until the very end. 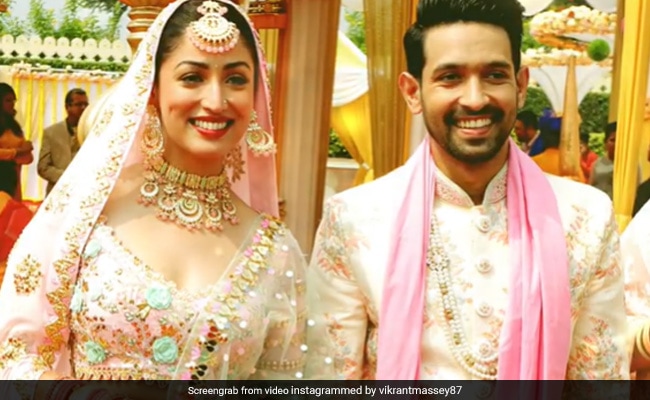 Ginny Weds Sunny Review: Yami and Vikrant in a still from the film.(Image courtesy: vikrantmassey87)

A layer of surface gloss, a cloak of amiability and a dash of gentle irreverence cling to Ginny Weds Sunny, a breezy rom-com just out on Netflix, like a gossamer wrapper, making it an easy film to watch. If only it did not opt to skim the surface of the complexities of new-age love, it might have turned into something infinitely more substantial than just mildly diverting entertainment. But in the bit that it puts on show, there is a considerable degree of competence.

The screenplay (Navjot Gulati and Sumit Arora) is smart enough not to take itself too seriously, debutant director Puneet Khanna imparts an easy flow to the tale of entanglements and endearments, and the performances are in keeping with the fun spirit of the enterprise.

Indeed, there isn't too much to dislike in Ginny Weds Sunny, barring the contradictions that beset the lead characters and the contrived climax that rests squarely one girl's change of heart - it happens after a great deal of emotional manipulation - and another's act of altruism. If you believe the picture that the film paints, some to-ing and fro-ing in matters of the heart is free of the risk of permanent damage.

The heroine, Ginny (Yami Gautam), a Delhi-NCR insurance company employee, is a tough, free-spirited girl who does not make a song and dance about the rebel in her. She believes that she does not need a man to be continually by her side. When one of the guys in her life says he will give her freedom to do what she wants after marriage, she dismisses the suggestion with the scorn it deserves.

Yet, Ginny is bothered by the fact that her constant chaperone and ex-boyfriend, pampered transport company scion Nishant (Suhail Nayyar), is commitment phobic. We are told that the two broke up a year and half back, but the girl does not break free completely from Nishant. That decision of hers flies in the face of her contention that the constant company of a man isn't essential.

Moreover, when push comes to shove, Ginny has no qualms about ridiculing Sunny (Vikrant Massey), a neighbourhood boy has a crush on her and is in a desperate hurry to get hitched, for being "a marriage addict". That sobriquet, the girl asserts, is valid for her mother Shobha Juneja (Ayesha Raza), too. But, then, that isn't surprising at all - her mom is a professional matchmaker.

Mrs Juneja is certain that the straightlaced Sunny, only son of hardware store owner Pappy Sethi (Rajeev Gupta), is the perfect match for her daughter. She goes out of her way to help him woo Ginny without taking the latter into confidence - which obviously leaves the door ajar for major recriminations in the pre-climax sequences. And there is of course a family tragedy that Ginny hasn't been able to live down - it comes in handy when ties between her and Sunny reach tipping point and it becomes mandatory for her to melt. Ginny life alternates between her almost businesslike interactions with Nishant - most of them in his swanky new Beemer - and her blossoming romance - or something akin to it - with Sunny, which pans out in the course of autorickshaw and Metro train rides.

Sunny lives with his mild-mannered dad, mom Rita (Menka Kurup) and little sister Nimmi (Mazel Vyas) but wants to branch out on his own and start a tandoori restaurant. Getting married is central to his plans for the immediate future. Sunny has had a crush on Ginny since their school days, but at the back of his mind is the worry that she is way out of his league. Hence the secret deal with the girl's matchmaker-mother.

The heroine's ex-boyfriend, who continues to be a part of her circle of buddies, is a bundle of contradictions. So much so that he becomes a byword for confusion. In fact, "Confusion" is the name under Ginny saves the guy's number in her phone.

For all its good intentions and general technical finesse - cinematographer Nuthan Nagaraj bathes the film in a cheerful glow - Ginny Weds Sunny is marred by a bit of the same confusion that defines Ginny's relationship with the flighty Nishant. By the time he finally decides to formally propose to her, much water has flowed under the bridge.

None of the major characters in the film, even the somewhat standoffish Nishant, is unlikeable. Nishant is wracked by doubts, Sunny is awkward, and the worried-stiff parents know exactly when their wards are to be left alone. It is a nice, compact world where minor errors lead to only minor conflicts. They never snowball into imbroglios that cannot be sorted out with a bit of tact.

The trouble with such a world is that the audience can begin to predict well before the film is into its final one-third how exactly it is all going to end. To that extent, Ginny Weds Sunny springs no unsettling surprises. What it does, however, is craft a story that alternates between the humorous and the solemn without losing touch with its witty core.

On the acting front, Vikrant Massey and Yami Gautam make a great screen pair - the former's studied gawkiness is the perfect foil to the latter's cheeky vibrancy. Suhail Nayyar, in the role of the ex-boyfriend who takes his own sweet time to get the message that his time his up, is earnest and cocky by turns without showing the strains of the repeated shifts.

Nobody enlivens Ginny Weds Sunny as much as Rajeev Gupta (an actor so natural that he never seems to break a sweat) and Ayesha Raza (who is always on the top of her game, lending strength to the film's high-spiritedness).

There is nothing eye-popping, big or fat about the wedding that the film ends with, and that is the principal plus point of Ginny Weds Sunny. That it isn't the sort of entertainer that will sweep you off your feet does not undermine its ability to keep you interested in the fate of the two protagonists until the very end, no matter how many missteps mar the progress of the duo - and the film.